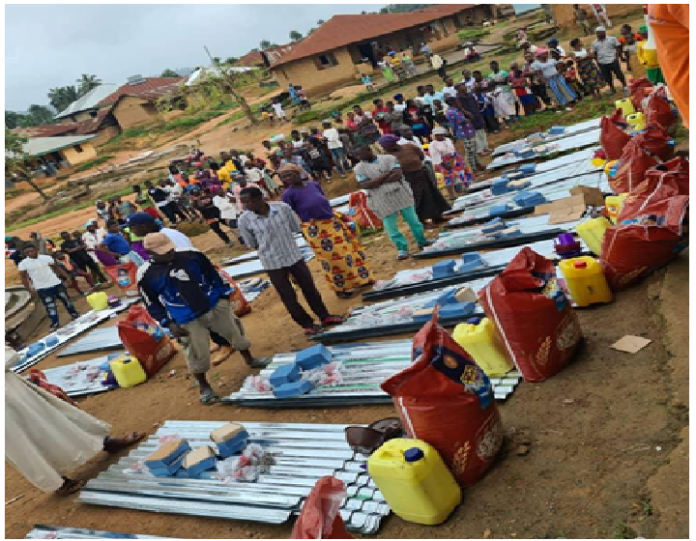 By Directorate of Communications

With support from the Office of the President, The National Disaster Management Agency (NDMA) through its Directorate of Relief and Response last week continued the provision of food and non-food items to a total population of 1,011 fire and windstorm victims in various towns and villages in Kenema and Kailahun districts. A total of 122 households, 55 houses and 9 public structures were affected including 68 Persons With Disabilities (PWDs) and their children.

Each household received a bag of (50kg) rice, a gallon of (10ltrs) vegetable cooking oil, plates, soaps, bowls, veronica buckets and blankets. Bundles of zincs and roofing nails were allocated to house owners based on the magnitude of their loss. A total of 122 (50kg) bags of rice, 122 gallons of (10) cooking oil (10ltrs), 365 bundles of zincs, 60 packets of roofing nails, and 19 packets of 3- & 4-inches nails were provided to the victims.

In his welcome statement, NDMA’s Regional Coordinator for Eastern Region, John S. Goba said that the NDMA is committed to reducing and mitigating disasters and is equally dedicated to responding to victims whenever disaster strikes to cushion the effect. He appealed to the victims to stop cutting down trees and building houses on hilltops or steep slopes.

Also, in attendance was Councillor Jusu M. Kerpu of Ward 057 in Kenema District who, while making his statement thanked HE President Julius Maada Bio for establishing the NDMA and outlined the significant role it has been playing in coming to the aid of victims to ameliorate their suffering.

“The significance of the NDMA cannot be overemphasised; the Agency has been visiting disaster victims in their localities to respond to them which demonstrate a sense of compassion. I’m appealing to the government to concentrate more support to the NDMA to enhance its capacity to effectively manage disaster-related matters and continue the good job in the country.” He noted

NDMA’s Deputy Director of Relief and Response, Tomaye Morlu Brewah who led the response team explained that President Bio is highly appreciated and commended for establishing NDMA to manage disasters and ensure the provision of relief items to victims and improve their conditions.

He also said that government will always allow key stakeholders and community leaders to champion issues of disasters regardless of their political affiliation and beliefs.

“Wherever we go, be it North, South, East or West, we will always incorporate the Councillors, Members of Parliaments and other stakeholders in our functions and operations. We will encourage their views and opinions and respect their belief” he added.

Expressing gratitude on behalf of his colleague victims, Gbessay Moseray, who is a person living with a disability said that they had long waited for NDMA’s intervention as their suffering increased owing to inadequate accommodation as all 68 of them and their children are clustered in a four-bedroom building which in fact is not disability friendly.

“We truly appreciate the NDMA for their timely support. This support will help us greatly to rebuild. We’ll do what you have advised us to prevent such from reoccurring. We’ll ensure to manage our waste very well and continue to protect our environment.” He said.

The provision of relief items to disaster victims is a statutory function bestowed upon the NDMA. The Agency also has the mandate to manage disasters and similar emergencies throughout Sierra Leone. Disaster Risk Reduction & Preparedness and Risk Communication are at the centre of NDMA’s operations in ensuring that the risk of hazards is mitigated and effectively engaging citizens to understand how to relate to the environment to reduce the risk of hazards within their communities.

The Agency is currently decentralizing the management of disasters across the country by establishing District Disaster Management Committees (DDMCs) with support from the United Nations Development Program (UNDP) while continuously providing capacity building for its staff members across the country, community volunteers and community stakeholders to prevent, manage and respond to incidents within their communities.

Previous article
Bio Raps CSOs, Media, Bar Association on Peace Consolidation
Next article
“Resist all forms of corruption in the discharge of your duties”
Politics