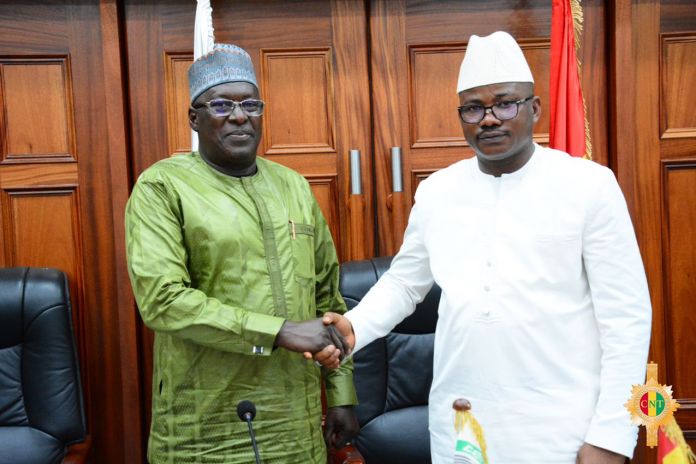 Speaker of the Economic Community of West African States Parliament, Hon. Sidie Mohamed Tunis and his delegation are currently Conakry Guinea on a parliamentary diplomatic mission as a support to the ongoing engagements being conducted by the ECOWAS commission which is to follow up on Guinea’s transitional plans, as well as the security and humanitarian situation.

The delegation was received by the National Council of Transition on Sunday 23rd October, 2022 at the Gbalamuya border. After the engagement on Monday 24th October, 2022, Speaker Tunis noted that they are in the country for the sake of the Guineans. He said that he had met the President of CNT in Kigali for the IPU meeting where he adequately represented the country well which he said urged him to come to Guinea as soon as possible to support the CNT and engagements that has been going on between the CNT and ECOWAS. “As you all know, there was an agreement for a 24 months transition process to civil rule and our business in the ECOWAS parliament is to support the process by ensuring that we align ourselves with what has been agreed on,” he said.

In his own remarks, the President of the National Council of Transition, Dr. Dansa Kourouma said they are honored to welcome the delegation led by the Speaker of the ECOWAS Parliament which means support and solidarity to ensure that Guinea transitions successfully. He continued to assure the speaker of ECOWAS parliament that the CNT is working hard to implement the mandate of the transition council so that it will not lead to other transitions. “We will make sure we conform ourselves with the best practices so that want to serve as an example,” he said. Dr. Kourouma furthered that they cannot achieve a successful transition if they do not get the necessary technical, political and diplomatic support to implement the mandate of the transition council.

The delegation will continue further engagements with civil societies and other stakeholders in the coming days.

It could be recalled that Guinea junta leader Mamadi Doumbouya announced the establishment of an 81-member National Council of Transition (CNT) to serve as the country’s parliament and legislate during the transition leading up to election. The transition began in September, 2021 when former President Alpha Conde was ousted by a coup d’etat.  This was followed by the suspension of its membership in the regional body which is ECOWAS. Since then, ECOWAS has been negotiating ways to ensure a smooth transition to civil rule.