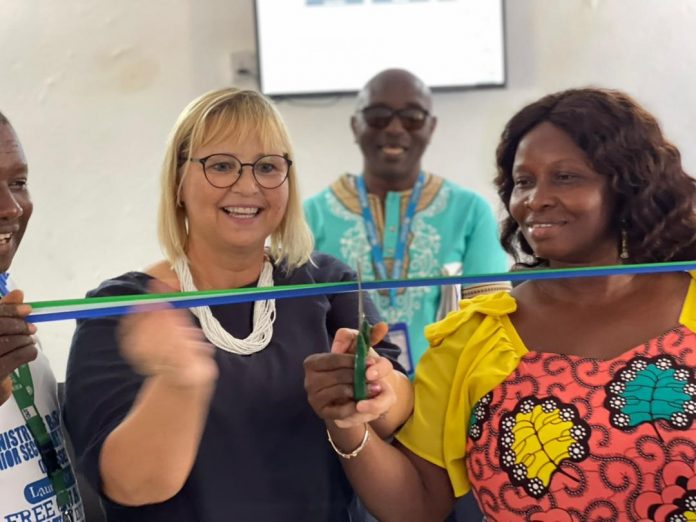 The Call Centre has been set up through the generous contribution of the Global Partnership for Education, (GPE), which has been directly supporting pre-primary, primary schools, early grade teachers and students since its inception in 2018.

Representing UNICEF, Madam Liv Elin Indreiten stated that due to the digital revolution, quality data are acquired for use in evidence-based decision making, addition that Sierra Leone is therefore in line with current global trends by putting in mechanisms to use digitized methods of monitoring at decentralized levels.

According to her, the centre will further help to improve the use of quality and timely data for planning, advocacy and policy making across the education sector and will serve as a single hub of communication between MBSSE and its related stakeholders in education.

“The utilization of the toll-free line (8060) has resulted in an exponential increase of calls to the short code (8060) which was originally routing to six Mobile phones, noting that the calls range in nature from questions, complaints and concerns related to schools subsidies, school safety, lack of teaching and learning materials, examination malpractices, extortion, lack of school infrastructure and furniture; and school related gender-based violence incidents,” she said.

She said through this call centre, MBSSE will have an opportunity to maintain an electronic database of all incoming calls, documents the cases and refer cases to designated officers in the MBSSE, adding that monthly reports will also be generated from the call centre, and these will be shared with the MBSSE Management and other stakeholders to support informed decision making.

“There was a need to capture qualitative data and datasets that were not included in the RapidPro platform. This was faced with a lot of challenges which has impeded the efficiency and impact on learning outcomes,” he said.

The Call Centre was officially opened by the Acting Permanent Secretary of the MBSSE Madam Aminata Y. Sannoh and she thanked UNICEF and GPE for providing the resource centre, assuring them that the Call Centre will be well utilized.