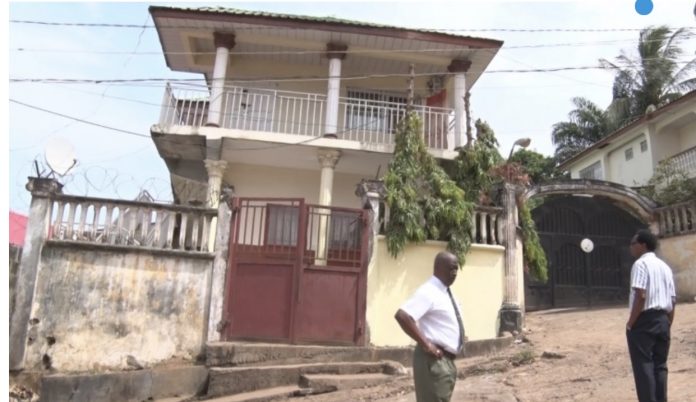 Two men in their 70s have accused a church believed to be Lighthouse Fellowship Church of Private Nuisance.

The Church is holding service on the ground floor of a house they are both sharing fence with at Hill View Regent Road Lumley.

The complainants say noise from the church keep them from getting good sleep at night and as well irritates them with loudspeakers and other musical instruments. They said the act has been going on since 2012 and it is affecting their health.

77 years old Dandeson Harleston is the first person who supposedly started building a house at the scene in 1987 and moved-in in 1990. He named the area Hill View because of its geographical location overlooking part of Freetown.

Harleston said the locality used to be a very quiet residential area but as an elderly man who is supposed to enjoy his retirement, noise from the Church close to his bedroom put him under pain and suffering especially at night.

He cited that his children and grandchildren can no longer come to Sierra Leone because of the irritation next door.

Harleston further recounted that the problem started back in 2012 and the issue was taken to the police, court, ministry of lands, planning and City Council but the problem is yet to be addressed.

In addition to the alleged sleepless nights due to loud noises from the Church, 71-year old Joseph Kwame Bomah claimed that during the rainy season water from the roof of the house in question empties in his compound washing away the soil and exposing all the rocks.

He underscored that the church is causing so many problems especially for him as he claims that the Christian meeting house is directly on his fence.

Bomah as well narrated that he attempted to host some friends from the US who were also investors. But because of the regular loud musical instruments and other noisy activities of the church the investors were only able to spend two nights. The two elderly men noted that they left England (Dandeson Harleston) and America (Joseph Kwame Bomah) to come home and rest.

They are both blood pressure patients and the alleged annoyance from the Church make their pressure shoot forcing them to spend on additional treatment and drug prescription.

Section 3, Subsection III of Part II of the 1965 Public Order Act says any person who makes a noise to the annoyance of another person in any place shall, on conviction, be liable to a fine or imprisonment.

This medium reached out to the owner of the house Abdul Bangura who could not take an interview. But on a phone conversation made it clear that the area is not the only community with a Church. He said if the authorities deem it fit to close the Church, that is fine but he cannot kick a community Church out of his house because of two people.

The two men claimed to have exhausted all legal means needed to address the problem but that to date, no solution has been reached.

They are asking that state authorities relocate the Church to help them live a healthy life and for the calmness of the area as it had always been.

It seems like there is need for Churches to start having sound proofs to prevent their activities from disturbing others.