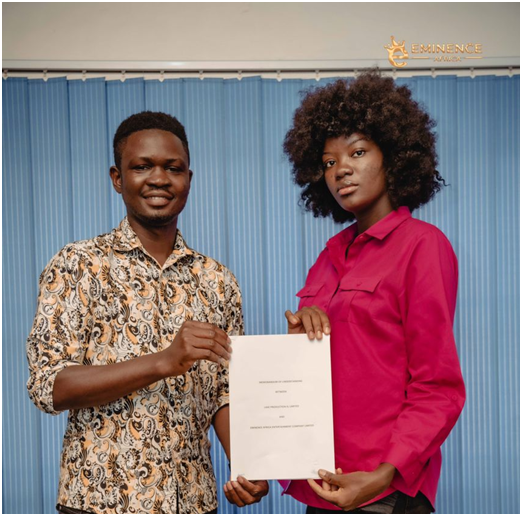 Josephus Raymond Allie, Director of Entertainment at Eminence Africa, expressed how excited he is for the move made by both companies and further stated that the Sierra Leone Entertainment industry needs more such collaborations to foster growth.

“We have to create a friendly atmosphere where entertainment brands would take such an opportunity to collaborate and work on projects that will give birth to incredible achievements. Let me also assure all that by twinning with Lake Production, together we will actualise this,” he ended.

Esther Y. Kamara, Executive Director of Miss Freetown Beauty Pageant on behalf of LAKE Production, mentioned that Sierra Leoneans should expect nothing but the best for this year’s Miss Freetown Beauty pageant as both companies think alike and stressed that, having two bright minds working together, it’s quite impossible for one not to expect getting a reward for something worthy of the cause.

LAKE Production has been into entertainment for years, hosting mega shows and believing in collaborations. They believe this will be an exceptional case as both companies value mutually beneficial partnerships that will enhance growth in the entertainment industry.

In the same vein, Eminence Africa is a household name in Sierra Leone. It is known for event management, branding and marketing, photography, videography, graphics design, live band, Artiste management and a whole lot more.

LAKE Production and Eminence Africa Entertainment will host the fourth edition of Miss Freetown this year. It is scheduled to take place on 26th of December 2022 at the Family Kingdom. (More details to follow).

Miss Freetown Beauty pageant is back; expect something bigger and better. The signing ceremony was attended by staff of both companies and the press.