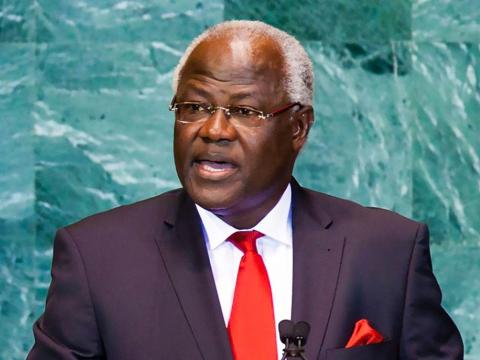 Ex-President Ernest Bai Koroma has been nominated to be the next Chairman of the African Union (AU), replacing ex-president Obasanjo of Nigeria.

These options were extended to both ex-President John Mahama of Ghana and Goodluck Jonathan of Nigeria. The two gentlemen declined, saying that they are interested to re-contest for the presidency of their country in the forthcoming General Election, as the Constitution gives them the right to do so as a result, they are not interested to be the next Chairman of the AU and replace, ex-president Obasanjo who is the current Chairman and will relinquish it anytime from now.

There was very significant reason to inform members of his political party, the All Peoples Congress party that he would not be contesting for any position in the party.

Not that he was terminating his membership in the party, but he is not contesting either for the position of Chairman as the new 2021 constitution dictates or any position higher than that of Chairman of the party.

His new assignment is bigger than the APC party and even Sierra Leone as country, therefore he was advised by his new employers not to assume the role of Chairman and Leader of his local political party.

That does not limit his moral of financial contributions to the party. His membership of the party remains the same; however, the task that will be assigned to him requires his total commitment and focus in his new job.

At the last Elders Forum meeting held in Nigeria, ex-president Koroma was president and the issue of Obasanjo’s successor formed part of the agenda discussed. The two ex-presidents had declined, it was agreed that since ex-president Ernest Bai Koroma is not going to re-contest for the presidency again as the 1991 Constitution of Sierra Leone does not grant him that privilege again for another term, therefore he should replace the outgoing Chairman who has worked so hard to push the AU forward and makes it a very strong and formidable Union.

It would be recalled that the former Libyan President who was brutally killed on a gun had nurtured the idea of the Africa Continent coming together to share their common interest and achieve their goals. The late Gaddafi did not witness the realization of his dream, but championed the establishment of it prior to his death. He should be commended and commemorated for his vision.

The assignment of the AU Chairman is huge, cumbersome and tasking. He will be assisted by his deputies and other members of the Union. The AU works with other global and regional organizations in the world.