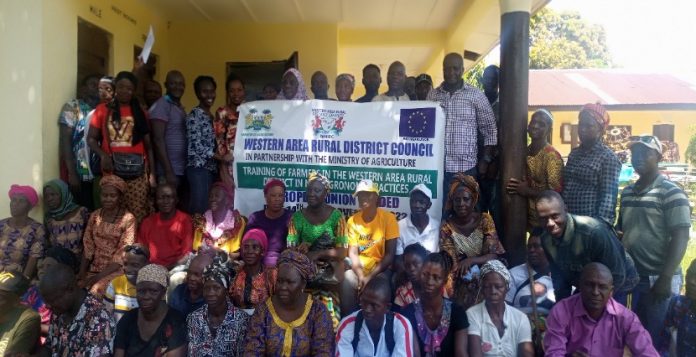 Western Area Rural District Council (WARDC)in partnership with the Ministry of Agriculture has held a 4-day training for farmers in the Westerns Rural on Agronomy practices, with funds from European Union.

Agronomy practice according to the District Coordinator for EU funded projects in WARDC, Abass Kamara, is a new mechanism that will be implemented in farming activities for better produce.

He said as technology improves, it is expected for every facet of livelihood to improve for easy living, adding that they want to equip the farmers with skills that will bring more yield so Sierra Leone, in no time, will start exporting its own farm produce as it was done in the 80s.

Mr. Kamara went on saying: “Everything we use in Sierra Leone is being imported and some of these foods are not so good for consumption, especially rice, which is very starchy and spending long time on the high seas”. He advised that people, especially youth should embrace farming because it is a paying job and lives depend of it.

Jane Fea Kabbaseh Sillah is the District Agriculture Officer at the Western Area Rural District. She encouraged the farmers to be serious about the training because it will enable them to improve on their farming skills.

She disclosed that the training is another support that will help ensure better harvest for food availability in the country, while thanking European Union for enormous support to the government.

The agronomy practice training will help farmers to manage their crops and in turns bring good harvest.

She said some time back, the District Agriculture Officer told them as a group to move their farming activities to the rural settings for more produce because the Western Urban where they used to operate, was invaded by land grabbers.

She assured that they are going to implement every bit of what they have learnt from the training into their next farming season.