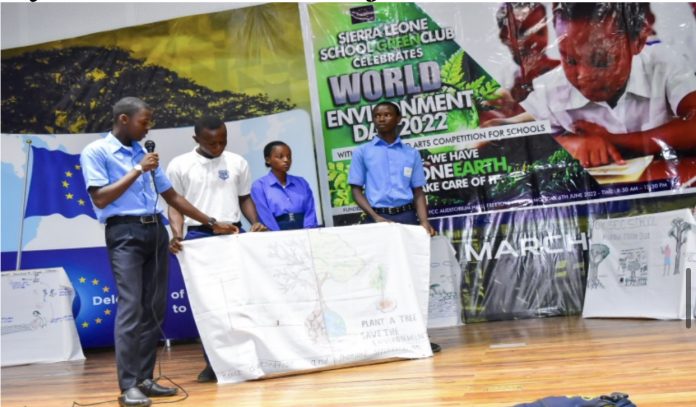 The Delegation of the European Union to Sierra Leone on Monday 6th June 2022, celebrated World Environment Day (June 5) with a poetry and arts competition organised by the Sierra Leone School Green Club with financial support from the EU Delegation.

Ten selected secondary schools in Freetown participated in the arts and poetry competition on the theme of the World Environment Day: ‘We Have #OnlyOneEarth, let’s Take Care of It’. This is part of the European Union’s continued engagement in climate action with the public. The objective is to raise awareness on the impact of climate change and environmental degradation in Sierra Leone and across the world.

Students aged 13 to 18 years from the designated schools exhibited their artworks and read their poems to the panel of distinguished judges at the Freetown City Council Auditorium. The event was honoured by the presence of government officials, local authorities, students, teachers, representatives from the civil society organisations and the private sector and environmental activists.

The artworks and the poems highlighted topics on critical environmental challenges in Sierra Leone. This included air, soil and water pollution, waste management and reduction of plastics, stone and sand mining, sustainable land use and deforestation. These challenges negatively contribute to environmental degradation, climate change and global warming.

The youth whose future is most threatened by climate change also proffered possible solutions to address some of the eminent environmental challenges facing not only Sierra Leone but also other countries around the world, in order to protect the lives and livelihoods of the present and future generations.

The Head of Cooperation of the European Union in Sierra Leone, Gerald Halter, congratulated the students for their remarkable presentations, which he believes, adequately demonstrate their knowledge and understanding of contemporary environmental problems, which bothers on the future of not only the current generation but also future generations.

He said, the European Green Deal is one of the main pillars of European Union partnership with Sierra Leone. This isreflected in the EU cooperation strategy with Sierra Leone (2021 – 2027), which effectively seeks to address environmental challenges in the country. Thereby, the EU clearly demonstrates its strong commitment in fighting climate change, global warming, and in promoting environmental sustainability in Sierra Leone.

“Change is possible, if only we act together and take the necessary actions needed to protect our environment, because we only have one earth, let’s take care of it!” he concluded.

He acknowledged the “European Union’s tremendous support to promoting environmental management and sustainability in Sierra Leone by working with CSOs and government agencies in the country”. The Acting Chief Director cited the EU’s support towards the establishment of the Western Area Peninsula National Park – a catchment area that provides about 90% of water supply to Freetown.

The EU has been actively involved in a wide range of programmes promoting green and sustainable agriculture, associated with fair trade and organic certification and is currently supporting different environmental and biodiversity initiatives. The EU programmes target more than 80% of all protected areas of Sierra Leone. This includes the Outamba-Kilimi National Park, Kambui Hills National Park, Management of Mangrove Forests (coastal landscapes from Senegal to Benin), and Conservation of the Gola Forest Landscape (Sierra Leone and Liberia), Revision of National Determined Contribution (NDC) and the Blue carbon project in the mangrove forest of the Sherbro River among several others.