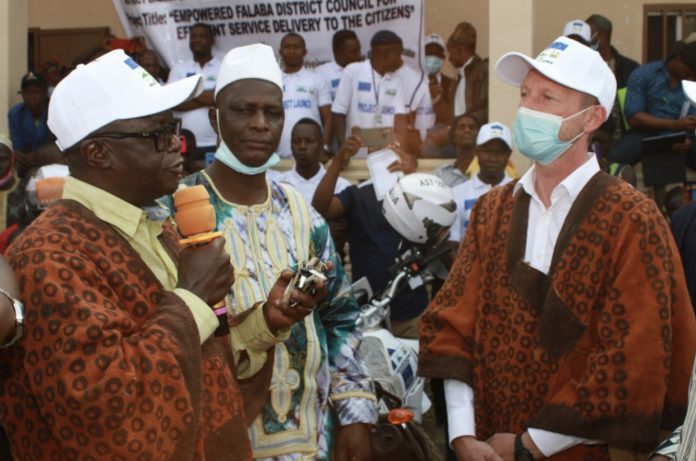 European Union Delegation to Sierra Leone together with the Government of Sierra Leone have launched €1,050,000 (Over 13 billion leones) project titled “Empowered Falaba District Council for Efficient service delivery to the citizens” under the Support to Civil Society and Local Authorities for Local Development project in Sierra Leone.

The launch took place at Mongo, district head quarter town of Falaba District in the Northern Region on Thursday 27 January 2022 and it is part of European Union support towards development in Sierra Leone benefiting six councils and civil society organisations.

Presenting the overview of the project, the Chief Administrator Abubakarr Daramy highlight that the areas of concentration for Falaba District Council include construction and rehabilitation of feeder roads and culverts across the district, construction of market stalls, construction of multipurpose hall among others.  Noting that other components like capacity building for council staff, Covid support, Support to farmers through seeds, barb wires to prevent fracas between cattle rearers and farmers.

While speaking, the chairman of Falaba District Council Ibrahim Sorie Sesay extended appreciation to EU for their support, citing how they even rendered technical support through the PMU. He however noted that the EU and Government should pay attention to the road which is a major challenge towards development in the district citing that if access is there then it will be easy to drive other development activities.

In his statement, Falaba District Caucus representative, Hon. Alhaji Foday Madie Jabbie encouraged the Council to handle the support with care while praising EU for their support.

Other stakeholders like the Paramount chief representative, Civil Society all pledged commitment towards monitoring the project and thanks EU for considering the district.

Head of Cooperation for EU Gerald Hatler emphasized on revenue generation project which will help in promoting sustainable Development in the district.

He highlighted the benefits of decentralization citing how it worked for EU countries.

The minister of Local Government and Rural Development Tamba Lamina while launching the project, assured the district if continuous support while applauding EU for considering the two districts i.e Karene and Falaba.

He pledged commitment of continuous collaboration and effective monitoring of the projects.

The launch was climaxed with decoration of the EU delegation and other stakeholders as a way of appreciating them. Traditional dance, songs and presenting of gifts was also part of the excitement.