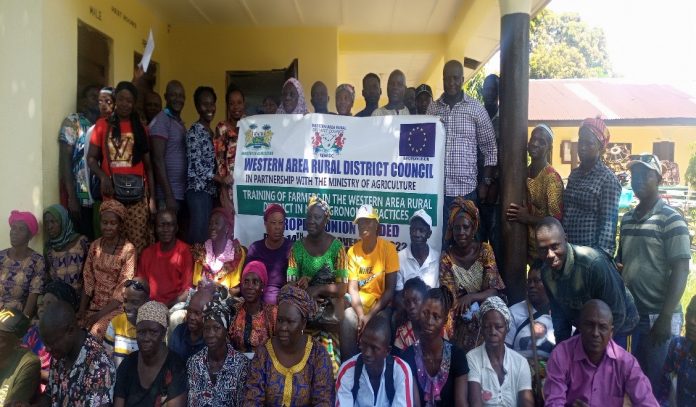 Western Area Rural District Council in partnership with the Ministry of Agriculture has concluded a 4-day training of farmers in Westerns Rural on Agronomy Practices, with funds from European Union.

Agronomy practice according to the District Coordinator for EU funded projects in WARDC, Abass Kamara, is a new mechanism that will be implemented in farming activities for better produce.

He said as technology improves, it is expected for every facet of livelihood to improve for easy living, they want to equip the farmers with skills that will bring more yield so Sierra Leone which will in no time start exporting its own farm produce.

He said: “Everything we use in Sierra Leone is being imported. Some of these foods are not so good for our health, especially the rice, which are very starchy and spent long time on the high seas go through different countries before getting to Sierra Leone.”

He advised that people especially youth should embrace farming because it is a paying job, adding that: “Our lives depend of it”.

Jane Fea Kabbaseh Sillah is the District Agricultue Officer for Western Area Rural District who encouraged the farmers to be serious about the four days training. She said it will enable them to improve on their farming skills, adding that the agronomy practice training will further help farmers to manage their crops and in turns bring good harvest.

The director disclosed that the ministry has been working and supporting farmers with seeds, working equipment and that this training is another way to support them.

With this she said there will be better harvest for food availability in the country, while thanking European Union for its enormous support to the government.

Director Jane however expressed frustration over the point that people are busy building houses in the swamps that is greatly causing hindrances to farming activities in both Western Rural and Western Urban Districts.

She said all wet lands belong to government and that trespassers are not only disturbing Agricultural progress but also causing disasters like flooding.

She therefore called on authorities to put a ban on all constructions on wet lands.

One of the participants, Mary Bangura from Songo Loko Farmers Enterprise expressed joy over the empowerment she had received. She said three ago, the District Agriculture Officer told them as a group to move their farming activities to the Rural settings for more produce because the Western Urban where they used to operate was invaded by land grabbers and their crops were perishing.

She said initially, the new environment was challenging but they did not give up, adding that this year’s harvest is going to be bountiful as they will be implementing every bit of the teachings into their next farming seasons.

She among other participants expressed appreciation over this kind empowerment giving to them, saying: “farming is a way of living for us. So, we call on government to put stop to all ongoing constructions on swampy areas across the country.