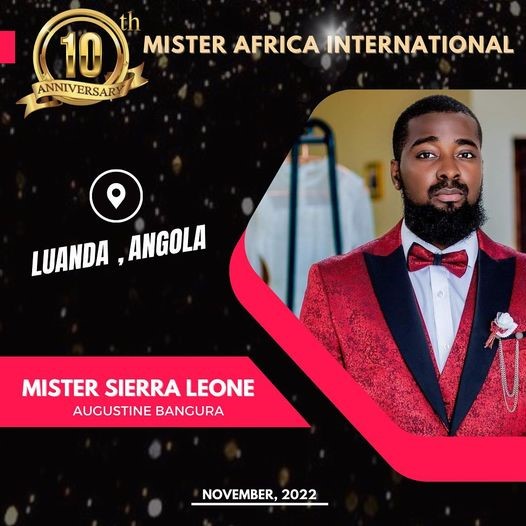 Former Housemate in the Housemates Salone Season 2, Augustine Bangura is all set to represent Sierra Leone in the upcoming Mister Africa International pageant in Angola in November 2022.

Mister Africa International is termed as the battle of the African Kings, with contestants from 30 countries, but will end with one winner with the ultimate goal of raising money for charity for young African Talents around the world.

Mister Africa International is an annual International male competition that is run by the House of Twitch. It is the premium African male pageant that brings together African male title holders not only from the African continent but also from countries that have a strong African presence.

The show was launched in 2012 by Ayotunde Twitch and Jennifer Richards at the African center, London and was held in London till 2018 when it was hosted in Nigeria in 2018 and 2019. Sierra Leone’s Adonis O Holi was the first winner of the male pageant.

Since its inception 35 countries have sent their representatives to the event. The winners typically travel to different countries during their reign, promoting Mister Africa’s advocacy which is to promote Talent (skill acquisition) and Education in Africa.

The current Winner is Emmanuel Umoh of Nigeria who took over from Tanzania’s Calisah. He beat 24 other countries to the title. He won a cash prize, and a new SUV, and has travelled to several countries including Tanzania, Ethiopia, Kenya, Ghana Seychelles, Liberia, and Togo amongst others.

His platform is education for disabled children and has raised millions of Naira to support this project The reality show star would hand over to a new king on the 16th of September, in Cote D Ivoire.