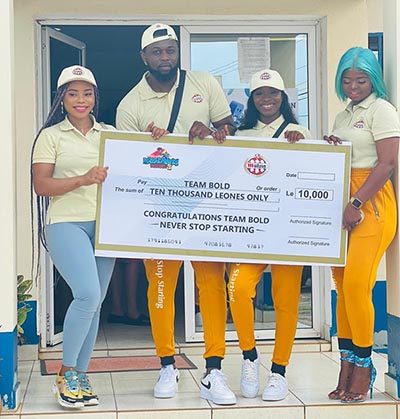 The Sierra Leone Brewery has given out prizes to ex-housemates who won the Mutzig Task during the Housemates Salone Yagba Season 3 show.

It can be recalled that during the Housemates Salone Yagba Season 3 reality TV show organised by AYV and Africell, Mutzig as one of the sponsors, gave tasks to the housemates to exhibit their creative ideas.

Speaking on behalf of AYV at the event, Marketing Manager Daniel Moore thanked Brewery for supporting the show and for promoting creativity among young people.

He noted that the Show is for young people to exhibit their God’s given potential and the idea of winner takes it all is not the goal of the organisers but to give opportunity to housemates to explore the world using the platform.

He mentioned that in this year’s Housemates show, lots of housemates won various prizes and that is the beauty of the show. He encouraged Sierra Leone Brewery Limited to see how they can incorporate some of the winners as brand ambassadors to inspire and challenge the young creative Sierra Leoneans.

On behalf of the Sierra Leone Brewery, Marketing Manager Aminata Kassim Carew appreciated the ex-housemates as she described their exhibition as outstanding. She said the entire task exhibition was unique with lots of creative contents but according to the judges Team Bold story was great with lots of creativity.

Several ex-housemates were present at the event, colorfully and smartly dressed in their Mutzig Outfit (Mutzig hoodie, cap and T-shirt) as they met and discussed with top Brewery management.