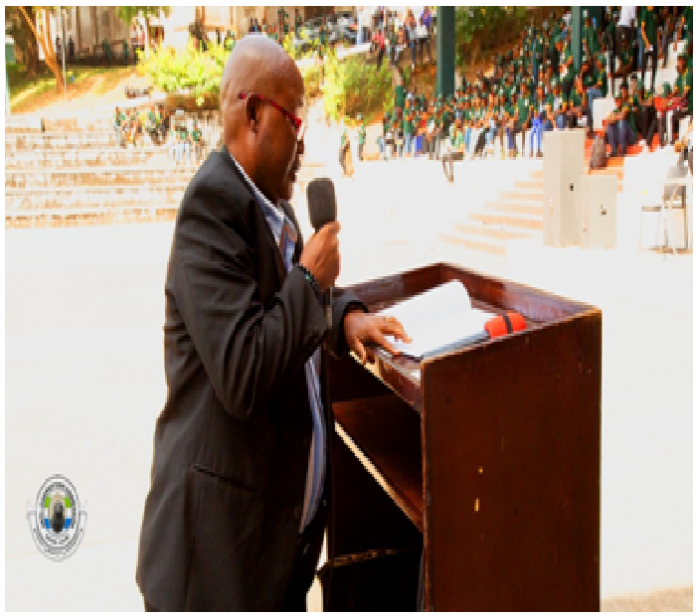 The Anti-Corruption Commission (ACC) has engaged and shared integrity values with freshmen of Fourah Bay College–University of Sierra Leone. This engagement took place at the institution’s orientation ceremony, for the 2022/2023 academic year, held at the Bishop Samuel Adjai Crowther Amphitheatre.

Head of the Outreach Unit, ACC, Musa Jawara making his statement, noted that the fight against corruption is a national fight that the ACC leads, but depends on the support of the general citizenry, which young people form a greater majority of. He mentioned a number of possible practices that can constitute a corruption offense, suspected of being perpetuated within universities that includes; spying, leakages, sex for grades, and concocted certificates for admission, among many others.

Mr. Jawara strongly counseled students to abstain from engaging in any act of malpractice, disclosing that it is such that can attract sanctions and other punitive measures from not just the universities for defaulters, but a fine of not less than Le50,000,000 (old Leones)/Le 50,000 new Leones or a jail term of not less than five years upon conviction, pursuant to the provisions of Section 128 (3) (Academic Malpractice) of the Anti-Corruption Amendment Act of 2019.

He also highlighted the dangers of these academic malpractices on the students, human capital and national development, our educational system, etc, adding that corruption in the education sector, in addition to eroding the quality and integrity of our education system, will affect a person’s capacity to compete for scare opportunities in employment, business and further studies, consequently dent the credibility of educational institutions and further prevent the country from having quality human resources needed to foster its desired growth.

“When people are able to acquire quality education, they can break through the vicious cycle of poverty. Education, therefore, helps to reduce various forms of inequalities”, Mr. Jawara reechoed whilst highlighting the many benefits of an integrity-driven learning system. He, therefore, encouraged them to support the fight, by reporting corrupt activities to their authorities, and directing the same to the ACC if they are not responsive to those reports.

Public Relations Assistant, ACC, David Yusuf Kabia earlier updated the students on the activities and various strides of the Commission, in tackling the menace, –corruption that has over the last four years yielded so many dividends. He talked about the Millennium Challenge Corporation (MCC) Scorecard, the outcomes of the Transparency International Corruption Perception Index TI-CPI, and the Afrobarometer among others, which show a constant upward mobility of the ACC and Sierra Leone’s performance in controlling and combatting corruption. He also mentioned the 2021 Auditor General’s Report and the actions that the ACC has taken and plans to take.