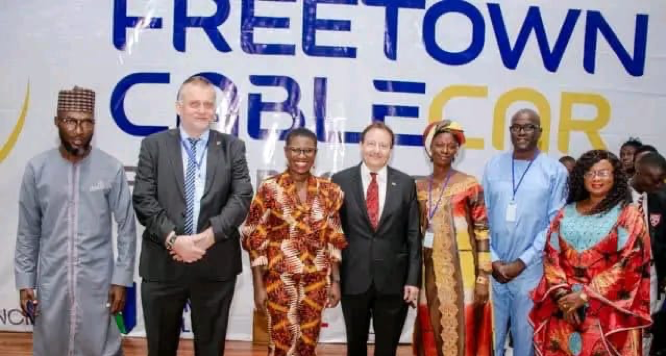 The event was a laudable one as it is another significant milestone in the process of the design, financing and implementation of the Freetown Cable Car project, which is an innovative and sustainable transport invention that is geared towards mitigating the traffic congestion and climate change in Urban Mobility of Freetown.

Speaking at the event, the Mayor of Freetown Yvonne Aki-Sawyerr acknowledged the tremendous effort and support given to the Freetown City Council by developing and implementing partners. She went on to say that this project started in 2019, when they launched the Transform Freetown project – with urban mobility and the cable car project serving as the primary goal.

She noted that they are thrilled to have secured funding for the full practical study despite the process was a competitive one; as Freetown was among 86 other cities that applied for the grant. Fortunately, the grant was secured alongside 14 other cities, which is going to be funded by the German, French and UK Governments, which will be implemented by C40 Cities Finance Facility and GIZ.

Yvonne Aki-Sawyerr mentioned that the urban mobility has been faced with so many challenges like the rapid increase in public transportation, increase in the urban population, congestion and mitigation of the air pollution caused by gas from car engines (greenhouse gas emissions), and the cable car project is aiming at addressing all these challenges.

She noted that they are also trying to address the hillside challenges and making transportation easier, and it is a road map to ensure that these selected areas reduce traffic congestion. She affirmed that the cable car is going to be solar powered to avoid the ravaging challenge of fuel crisis in the country – and not only that, the fee will be less than the average as they are targeting it to be Le.5 per person; and it will be transporting about 4 to 6.000 people within the hour.

She concluded that they are looking forward to the commencement of the building of the cable car line and sub-stations in March 2024, as they look forward to the successful execution of the full practical studies for the Freetown Cable Car system and urged the central government and other relevant stakeholders as well as the ordinary Sierra Leonean to collaborate in order to bring this project to reality.

The German Ambassador to Sierra Leone Horst Gruner, acknowledged that it is a great pleasure to be part of such a profitable project especially as funding partners. He added that the Freetown Cable car project is a fantastic and wonderful innovation, and the German development foundation is going to great lengths, doing the extraordinary to make this project a successful one.

He underscored that the world and major cities are experiencing dramatic climate change, and cities play a pivotal role in global transformation – and the C40 Finance facility is focused on transportation and energy, with Freetown City being a clear manifestation of its mission.

The representative of the C40 Finance Facility Marco Salm, said that the CFF is all about implementing new technologies in cities, and they support cities tackle the issue of financial challenges.

He added that the CFF supports project transition from planning to implementation. The C40 CFF focuses its support for projects that have reached the project scoping phase and are seeking support directed at business case development, financial structuring and financing options assessment.

He underscored that the pilot cable car route will have the potential to act as a catalyst for larger transformational change. The eastern line is the first of three planned routes of an envisaged cable car network in Freetown.

He concluded that out of 60 other countries that applied Freetown City was chosen to bring the cable car project. This project will provide a safe and reliable mode of transport to address the rapidly increasing public transport demand in Freetown (over 14.000 Passengers per hour peak hour demand). The pilot route will improve accessibility to hillside communities in Freetown with the central business district, a main market location, and interchanges with buses and ferry terminals – and the project is estimated to create 2.200 short – term jobs (during construction and 70 long – term jobs (during operation).

The CFF committee will be meeting in July 13th – 14th to deliberate on the technical issues that surround the project, and an expert team of international consultants will develop feasibility studies and other inputs required for a strong business case.

The event climaxed with a display of the prototype of the cable car and a technical explanation of how it will be operating.