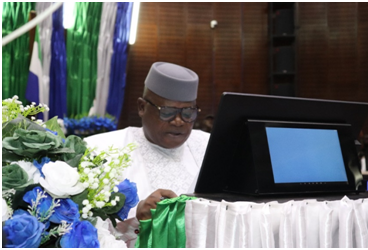 Sierra Leone’s Ministry of Finance has presented a Budget of NLe9.35 billion to parliament for the Financial Year 2023.

In the Budget, domestic revenue for the financial year 2023 is projected at NLe9.35 billion (14.0 percent of GDP).

Grants are projected to amount to NLe3.8 billion. Of the grants, budget support to be provided by the World Bank will amount to NLe1.8 billion and project grants of NLe2.0 billion.

The budget will fund the 2023 general elections, hence, the composition and allocation of Government expenditure for the 2023 financial year reflect these priority areas.

On education, government is allocating a total of NLe2.1 billion to the education sector, accounting for 22 percent of the total discretionary budget to support basic, secondary, higher and TVET education.

On health, government is allocating a total of NLe938.7 million to the health sector, accounting for 10.0 percent of total discretionary expenditure, of which NLe759.4 million is allocated to the Ministry of Health and Sanitation.

The allocation includes NLe618.5 million as salaries for health workers.

On agriculture, government is allocating NLe252.5 million to the Agriculture sector. Of this amount, NLe18.7 million is for the salaries of staff of the Ministry of Agriculture.

From the recurrent budget, government is allocating NLe39.2 million to support agricultural productivity and livestock development and NLe21.8 million for agricultural research. Transfers to local councils for the sector will amount to NLe11.9 million.

On fisheries and marine resources, government is allocating NLe30.7 million to the Ministry of Fisheries and Marine Resources, of which NLe2.8 million is salaries for staff and NLe17.9 million to support artisanal fishing and the promotion of fish export activities.