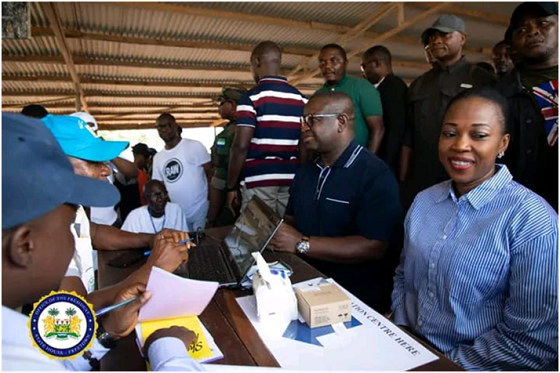 The husband and wife on 3rd September 2022 completed their voter registrations process at the Military Hockey Pitch at Wilberforce in Freetown, where they also urged citizens of voting age to come out in numbers and register with the Electoral Commission of Sierra Leone, so that they would be qualified to vote in the 2023 national Presidential, Parliamentary, and Local Council Elections.

“This is not the first time the Electoral Commission is embarking on the electioneering process in the country. They have been doing it every five years. So, as a government and as a nation, it is our expectation and conviction that they have been working very hard to be perfect in handling such tasks.

“With support from the National Civil Registration Authority, NCRA, the work is much easier now than in the past, because once my name was inputted into their system, all other details that were required to be asked just showed up in their system. I was registered very quickly. So, I am sure that, for the ECSL, this exercise will be a very quick and short process,” the President said.

“Go and register so that on that day you will have the power in your hand to change or support the government in power,” he said and called on political party supporters to be peaceful, law-abiding and to abstain from all forms of violence.

“So, nobody is expected to be violent. Democracy is an alternative to violent change of government. I am calling on all citizens of voting age to register so that they can maintain this government because of the many good things we have been doing. We are still counting,” he concluded.