First Family Signs Book of Condolence for HM The Queen

First Family Signs Book of Condolence for HM The Queen 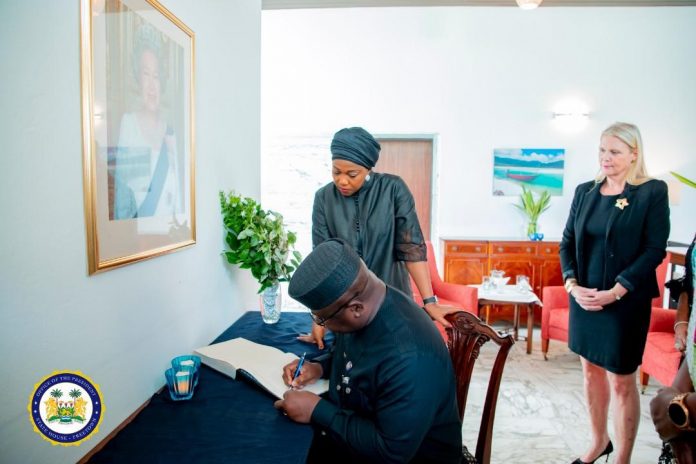 President Dr Julius Maada Bio has signed the book of condolence for Her Majesty Queen Elizabeth II, who passed away at the age of 96 on 8 September 2022 at Balmoral Castle in Scotland. After the ceremony at the residence of the British High Commissioner on Hill Station in Freetown, President Bio, accompanied by First Lady Fatima Bio, stated that the Queen’s reign was marked by boundless growth, peace, and prosperity.

His Excellency had also tweeted earlier, saying: “I am deeply saddened by the passing of Her Majesty The Queen Elizabeth II of the United Kingdom of Great Britain and Northern Ireland”. He also directed that the flags be flown at half-mast throughout the Republic of Sierra Leone, in honour of the late Queen.

Elizabeth II, the Queen of the United Kingdom and the other Commonwealth realms, the longest-living and longest-reigning British monarch, had a great relationship with Sierra Leone dating back to when the Queen and her husband, Prince Philip, visited Freetown from 25 November to 1 December 1961. They arrived on the royal yacht Britannia, and Queen Elizabeth II Quay, in the east of the capital, was so-named as a result.