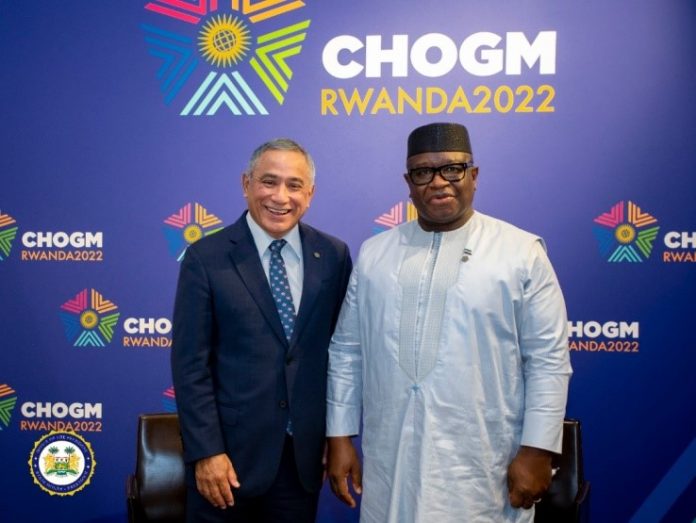 By Strategic Communications Division, Office of The First Lady

First Lady of Sierra Leone, Fatima Maada Bio has bade farewell to Athletes that would be representing Sierra Leone at the 2022 Commonwealth Games in Birmingham.

At the auspicious ceremony held at the Ministry of Sports, the Captain of the National Commonwealth Team, Joshua J.J Wyse thanked the First Lady and the people of Sierra Leone for their support and for giving them the opportunity to represent the country in the international competition in UK.

He assured the nation that the team is ready to represent well and make Sierra Leone proud.

The Minister of Sports said the process that led to the selection of the 28-Man Squad was herculean, adding and challenging, while noting his conviction that the team will return with victory.

He expressed appreciation over the unprecedented support from the Julius Maada Bio led government in promoting and developing various sporting disciplines in the country.

The Coordinator of the National Olympic Committee, Unisa Deen Kargbo said the greatest honour of every Athlete is to represent their country, while assuring the team that Sierra Leone is fully behind them.

In a brief farewell message, the First Lady Fatima Maada Bio expressed optimism that the team will return with greatness.

Making a presentation on behalf of Idriss Elba and Foday Dumbuya, the first lady expressed elation mingling and associating with the sports fraternity.

“I am donating these kits to the Athletes that will be going to the Commonwealth Games in Birmingham, as requested by Idriss Elba and Foday Dumbuya,” she stated.

She advised that the success behind every Athlete depends on hard work and dedication.

Mrs. Bio urged the team to put smiles on the faces of Sierra Leoneans.