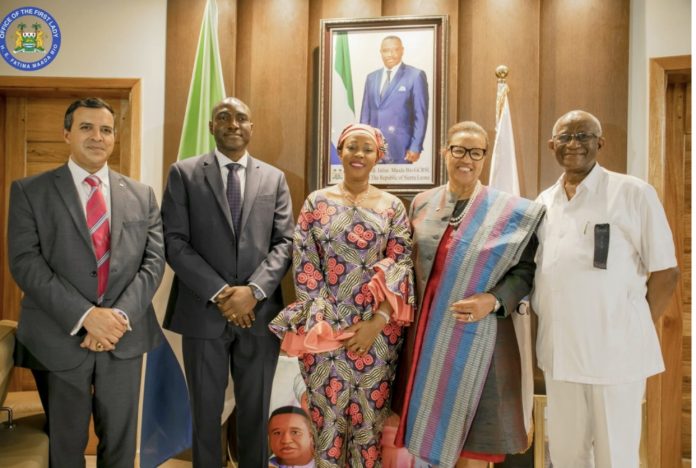 The sixth Secretary General of the Commonwealth of Nations, Madam Patricia Scotland has led a high-powered delegation to pay a courtesy call on the First Lady of the Republic of Sierra Leone, Mrs. Fatima Maada Bio at her Goderich Office in Freetown.

Madam Scotland expressed interest in learning more about the work of the First Lady, as according to her, Mrs. Bio’s focus on education, women and children aligns with the vision and recent campaigns of the Commonwealth.

“We would like to express our appreciation to you for devoting yourself to education, women and children which are very fundamental to us,” she highlighted.

“Let me state that I am particularly impressed with the passion and commitment you have demonstrated in ending violence against women and girls, as we pledge our unflinching support towards the success of your campaigns,” she pointed out.

The Commonwealth Secretary General urged the First Lady to remain steadfast in the work she is doing for the betterment of Sierra Leone.

“God bless you for all you do for Sierra Leone, the Commonwealth, women, daughters and sons,” she ended.

In her response, the First Lady Mrs. Fatima Maada Bio welcomed the Secretary General into her office, while disclosing that she works with a team of dedicated staff passionate towards the causes of women, girls, health, education and sanitation among others.

She expressed elation that her work is being recognised globally by the UN, Commonwealth, African Union and ECOWAS among others.

She also informed the visiting Secretary General about her partnerships with other First Ladies in the continent to ensure the success of their President husbands.

She assured her guest that she will continue the campaigns against rape and early marriage, as according to her, such factors are responsible for the spread of diseases like HIV, Fistula and school dropouts.

The First Lady disclosed that she is happy to lead the ‘Sierra Leone Says No More’ campaign in line with the Commonwealth Campaign against gender based violence.