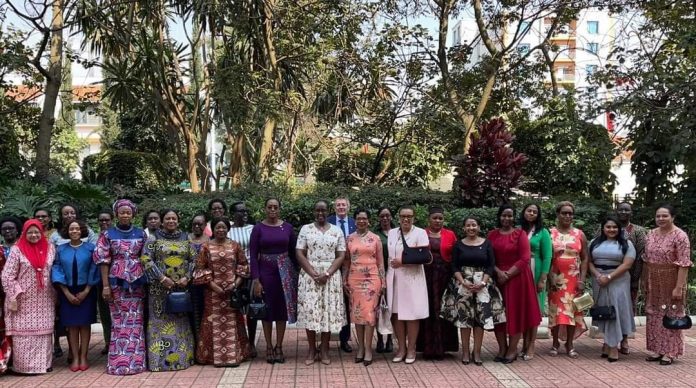 On the invitation of the First Lady of Rwanda, Mrs. Jeannette Kagame, First Ladies from various Commonwealth States, in the morning hours of Thursday June 23 2022, converged at the Marriott Hotel in Kigali for a strategic breakfast meeting to discuss unity and national cohesion of the continent.

The First Lady of Sierra Leone, Fatima Maada Bio, as usual, was prominently featured at the meeting with her counterparts.

The meeting was focused on mapping out strategies on how the first ladies could use their various platforms to foster peace and national cohesion.

The Mrs. Kagame Unity Club platform featured in the gathering as a best practice on how a nation can be united and progressive.

The Unity Club founded in 1996 brings together spouses of current and past leaders of Rwanda with a mission to enhance unity and peace and contribute to socio-economic development.

In her address, Sierra Leone’s First Lady, Fatima Bio highlighted how disturbed she was over the sad reality that politics keeps dividing our people in the continent.

She urged her colleagues to do more to unite their various nations in particular and the continent at large. Mrs. Bio highlighted her role as first lady of Sierra Leone in accelerating gender empowerment and child protection.

She also expressed her admiration for the inspirational leadership being provided by the Rwandan First Lady, who she considers as a mentor and an aunt.

In attendance also at the event was the Secretary General of the Commonwealth and several other high profile dignitaries.