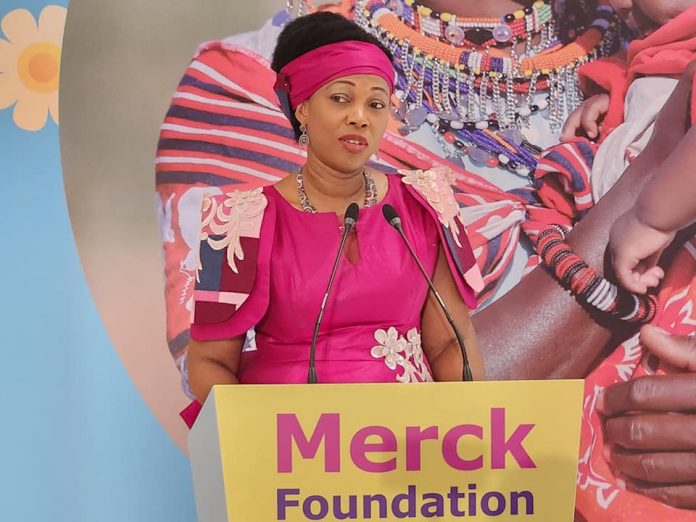 Speaking as a Guest of Honor for Africa’s First Ladies at the 9th Edition of Merck Foundation Africa, Asia Luminary 2022, happening at the Hilton Hotel, Habtoor City, Dubai, the First Lady of the Republic of Sierra Leone, Dr. Fatima Maada Bio disclosed that women in Africa go through extreme societal stigmatization whenever they are faced with issues of infertility, as the African society often blames women for childlessness.

She used the forum as an opportunity to make a clarion call for support to be given to women dealing with infertility issues, and the need to avoid stigmatization, as men equally go through infertility issues that is less talked about.

she has championed gender equality issues, rape and early marriage in Sierra Leone, which is now being replicated in other West African Nations.

‘’I believe babies are made by two people; hence the issue of infertility should be dealt with holistically and not in isolation,” she asserted.

She pointed out that she has been spotlighting gender equality and children’s welfare issues since she was at the tender age of 16, which was way before she became First Lady in 2018.

Her Excellency continued by highlighting the issues women go through each day, stating that their silence remains disturbing, which is why she chose the Hands Off Our Girls Campaign which deals with raising awareness on issues of rapesexual penetration, early marriage and fistula, and gives every woman and girl a voice to speak up and reclaim their lost glory, which is why the campaign has become a global phenomenon.

Dr. Fatima Maada Bio noted that Merck Foundation has helped trained over 40 doctors in Sierra Leone in different medical fields such as cancer, palliative care, and oncology, adding that they will be of immense help to the people of Sierra Leone through the 500 bed hospital medical facility project she is currently undertaking at the 34 Military Hospital in Freetown and other government establishments in the country.

“I am proud to share with you all that Merck Foundation has provided more than 1470 scholarships to young doctors from 50 countries in 32 critical and underserved specialities such as Diabetes oncology with many of them becoming the first specialists in their respective countries.