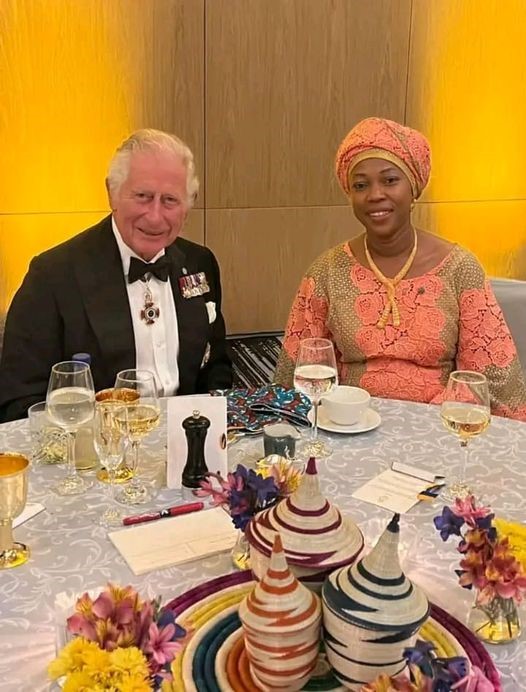 She will be received by royal courtiers and taken to Westminster Palace to personally stand and pay respects in front of the coffin of the late Queen lying on a purple catafalque in State.

She will then sign the official Royal Family condolence book following which she will be received in Buckingham Palace, by His Majesty King Charles III and other members of the Royal Family, at a reception for World Leaders and their Spouses.

Her Excellency is expected to depart from the United Kingdom after the Royal Funeral today Monday to join her husband President Bio at the United Nations in New York where she has a full schedule of planned activities.

The first lady is expected back in Sierra Leone from the United Nations on Sunday September 25th 2022.

Today Monday, dignitaries from across the globe including Dr. Fatima Bio and team will bid farewell to the queen at a service in Westminster Abbey.

The processions, mourning and commemorations that have followed the death of Queen Elizabeth II will culminate today with the queen’s funeral at 11am (London time) at Westminster Abbey, an event that will draw dignitaries from across the globe, with a massive worldwide audience watching online and on television.

Grand processions through the streets of London and then at Windsor Castle will accompany the queen’s coffin before it is buried today Monday evening in St. George’s Chapel at Windsor.

Buckingham Palace officials have detailed minute-by-minute plans for today. This morning heads of state and foreign royals will gather at the Royal Hospital Chelsea, a home for retired soldiers in West London.

From there, they will travel together to Westminster Abbey, though the palace did not specify the mode of transportation.

The doors of Westminster Hall, where the queen is lying in state, will close to the public at 6:30am, in preparation for the queen’s coffin to be moved to Westminster Abbey for her funeral.

Westminster Abbey will open at 8am for attendees who have been invited to the funeral. A procession will accompany the coffin from Westminster Hall to the abbey.

The journey is expected to take less than 10 minutes, and the route will be lined by members of the Royal Navy and the Royal Marines.

The procession will be led by about 200 musicians including the pipes and drums from the Scottish and Irish Regiments.

The carriage will be followed by King Charles III and members of the royal family. The dean of Westminster will conduct the funeral service, with readings by Prime Minister Liz Truss and Patricia Scotland, the secretary general of the Commonwealth. The archbishop of Canterbury, the Most Rev. Justin Welby, will give the sermon.

Toward the end of the ceremony, two minutes of silence will take place across Britain. The service is to end at 12pm. A procession will then follow the coffin to Wellington Arch, near Hyde Park, before being driven to Windsor.