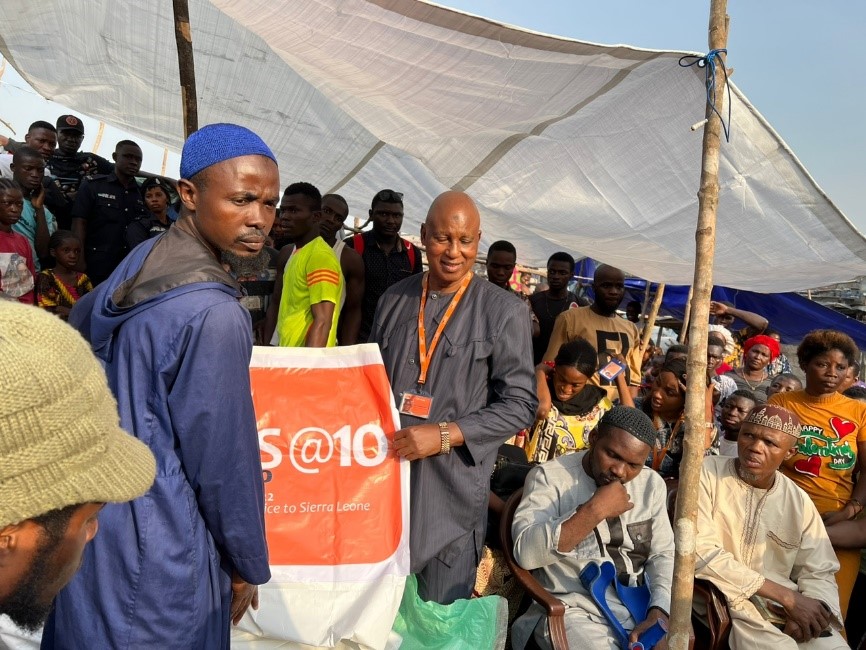 The Chief Executive Officer and Staff of FOCUS 1000 has donated food and non-food items worth millions of Old Leones to fire victims at the Susan’s Bay community in Freetown.

Welcoming the CEO and his Team from FOCUS 1000, the Chief Imam of the community Sheik Musa Kamara spoke about the good work of FOCUS 1000 over the years, which he says has helped in transforming the lives of women and children in Sierra Leone.

He quoted from the Quran saying “When people help others during their need, Allah will, in turn, bless and lift them”. He thanked the CEO and his Team for considering them during this challenging period.

Handing over 80 bags of rice, 500 bundles of water, buckets, soap, and other items, The CEO of FOCUS 1000, Mohammed B. Jalloh expressed his sincere sympathy for the unfortunate inferno in their community- causing the loss of properties and the displacement of people. “You should not lose hope for what has happened, when challenges happen, they should serve as an inspiration for you. Challenges happen, challenges are always bound to happen, but you should use this challenge and turn them into the success you want,” he said

The CEO continued that FOCUS 1000 was focused on working with women and children, but with support from Irish Aid and collaborations with the government and the Kombra Network, they have added emergency response and relief.

Alhaji Jalloh said that food items are paramount to the victims, which is why his organisation decided to assist with rice, water, buckets, soap, and other items, but more importantly to encourage the community to be courageous during this trying time”.

Apart from the food items we are donating, we are also here to let you know all is not lost, you should be courageous and hope for the better. There is the dark and the troubled side of life, but there is the bright and the sunny side too, he said.

He ended by advising community members on how to use electrical appliances to avoid such incidents.

Thanking the Team for this gesture, the chairman of the Susan’s Bay community Ishmail G. Kamara appreciated FOCUS 1000 for such a donation, he promised to ensure that the items meet the direct beneficiaries. He called for more support for the women in his community.