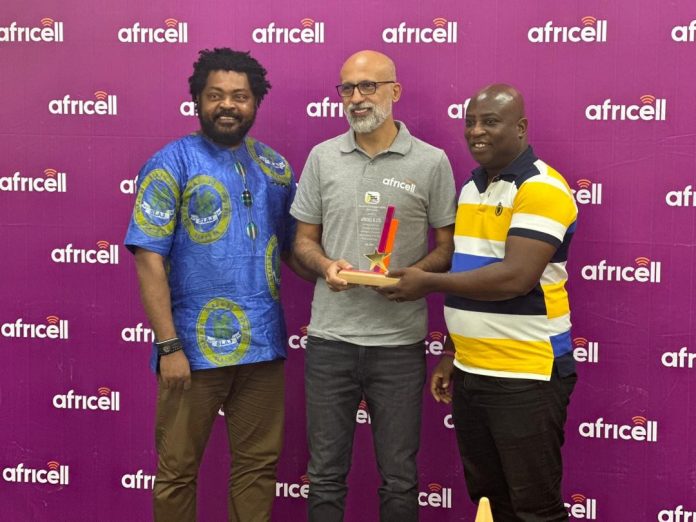 The Guild of Newspaper Editors – Sierra Leone (GoNE-SL) over the weekend presented an award to the Managing Director of Africell Sierra Leone, Shadi Gerjawi in recognition of his company’s “outstanding commitment and support to the growth and development of the Print Media in Sierra Leone.”

The presentation took place at Africell’s headquarters at Wilberforce in Freetown.

Accompanying the Guild was the President of the Sierra Leone Association of Journalists (SLAJ), Ahmed Sahid Nasralla, who is also a member of the GoNE-SL.

In his brief remarks, Nasralla acknowledged Africell’s significant contributions to the media as a whole over the last ten years.

He said the company is not just an economic pillar but also a viable partner, referencing Africell’s commitment to the Journalism Welfare Fund.

Chairman of the Guild, Donald Theo-Harding recalled Africell’s support to the media during the Ebola epidemic and the COVID-19 pandemic.

He said: “Africell has been very supportive to the Print media all through thick and thin…during Ebola, and throughout the COVID pandemic.”

He thanked Shadi for his support, and prayed for the sustainability of Africell’s partnership with the Print media.

Receiving the award, Shadi Gerjawi noted that it is not very usual for people to come and say thank you, that is why he “appreciates the award more than anything else.”

“This is greatly appreciated,” he said.

Furthermore, Shadi said he remains true to his commitment to the Journalism Welfare Fund, and same would be fulfilled.

Shadi expressed his heartfelt condolences with the media on the passing away of Philip Neville and Esther Kargbo, whiles dedicating the award to all staff and workers of Africell.