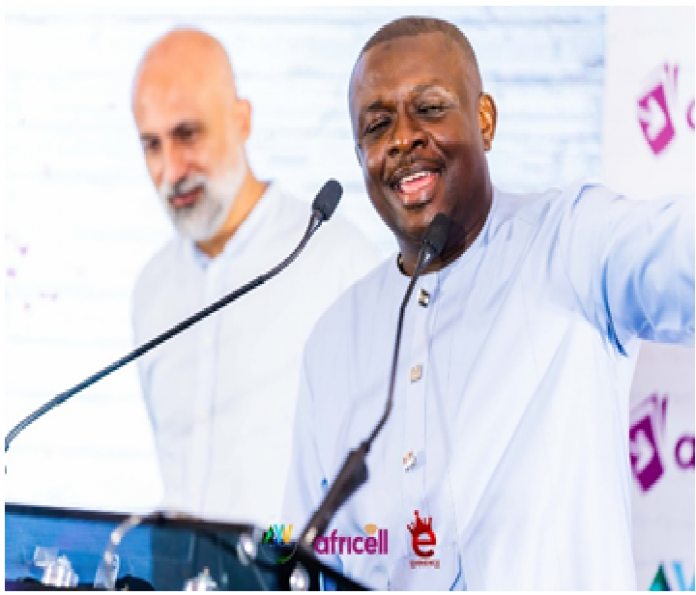 The final list comprises lawyers, journalists, musicians, environmentalists, a football team, fashion designers and entrepreneurs who use their services, businesses and/or crafts to inspire changes.

According to CGSL, Amb. Navo Jr. was voted by the people of Sierra Leone to be among the top 10 Sierra Leoneans who did remarkably well in their fields in 2022.

The CGSL said: “You are awarded for creating the space for young people to showcase and improve their talents and for your strides to showcase Sierra Leone’s authentic culture and stories to the world through the AYV on DSTV initiative”.

Ambassador Navo Jr said: “I appreciate CGSL for recognising my service to the young people of Sierra Leone. This is an inspiration to my plans for young people.”

Amb Navo, Jr. is a recipient of various national and international awards including the Most Credible Africans Award; Man of the Year Award from the Women’s Group – Sisters Choice; Lifetime Achievement Award from National Entertainment, Most Influential Person of the Year – Sierra Leone, and host of others.

Amb Navo; Jr was among the first Sierra Leone recipients of the Most Credible Africans Award. The list, compiled by Reputation Poll International (RPI), a leading reputation management and public relations consultancy firm, recognises individuals who have made significant contributions to their respective fields and have built a strong reputation.

This award is a testament to the contributions that Amb Navo; Jr makes to the African continent. It highlights his achievements and his work to improve the lives of others and make a positive impact in the world. Amb Navo; Jr has been credited as an inspiration to all Africans and a source of hope and great pride.

The Sierra Leone’s business magnate, Amb Anthony Navo Jr is also a distinguished recipient of the African Achievers Awards, as “African Media Entrepreneur of the Year”, for his unprecedented and unparalleled contributions to the development of the media landscape in the West African country.

Ambassador Anthony Navo Jr is a Council Member of the Sierra Leone Chamber of Commerce and a Youth Ambassador in the country. Empowering young people has always been the guiding motivation of Amb. Navo Jr.

Over the years, he has worked with and supported many young people and institutions across Africa.

It is the only Sierra Leonean owned television station with a broadcasting house in London. As part of its international portfolio, in March 2019, the AYV Media Empire announced a new partnership with the World Service Programme of the British Broadcasting Corporation (BBC), in London.

Amb. Navo Jr. has invested single-handedly over $10 million United States dollars in AYV Media Empire with the recent construction of a multi – million-dollar complex hosting the Housemates – Salone (a leading reality tv show in the sub-region).

This new building consists of seven stories and has an Amphitheatre, three studios for production, car park, an ultra – modern swimming pool and luxury rooms for the accommodation of crew members and guests.

As a widely respected philanthropist, Amb. Navo’s work cuts across the nook and cranny of the country, where he is widely regarded for the empowerment of young people from various backgrounds and professions.

He is the Co-founder of an International Charity (AWOL – All Works of Life) with educational objectives that necessitate developing society via several initiatives including accessible healthcare, education, sustainable development, and internationally coordinated programmes geared towards poverty alleviation.