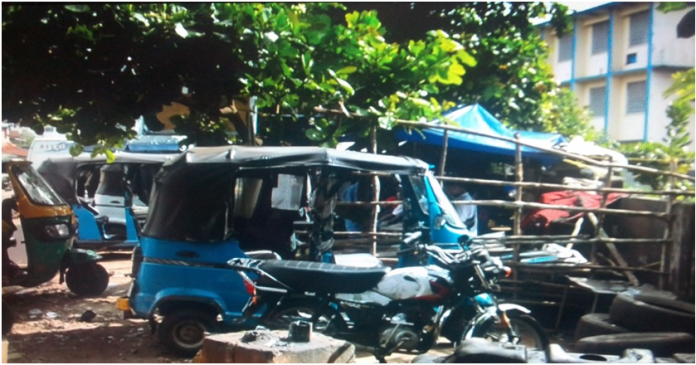 The administration of Freetown Secondary School for Girls (F.S.S.G) has expressed concerns over the discomfort caused by youth, tricycle riders, traders and a septic tank institution that have been outside the school fence doing business and other things for over ten years.

The Principle for the Junior Secondary School, Mrs. Gloria Mcfoy said the area is an eyesore and an unsafe environment for the school pupils. She added that the school Alumni and administration collaborated with the FCC and SLRA years ago to take action towards the occupants “it was a success for some time,” she said.  Principal for the Senior Secondary School Mrs Bobson Kamara said that the school environment is not hygienic because the occupants of the fence are littering the school and most times throw faeces in the school compound.

Bassie Kargbo, the Chairman for Hannah-Benka Coker Street Organization said, they have being occupying the fence for over 10 years and used the makeshift structure just outside the fence to train youth as mechanics who  repair tricycles while others are involved in trade.  “This endeavour has lessened the burden of job search and violence among youth which is why we are pleading to the school administration to be considerate with us,” he said. Bassie added that they are abiding to the white line demarcation drawn by the SLRA and FCC to keep the environment clean.

The Communication Specialist at the Sierra Leone Roads Authority, Keita Mohamed Jaward said they have made tremendous efforts towards the concern “but the issue is with enforcement, which is where the Sierra Leone Police comes in to help in that direction.”