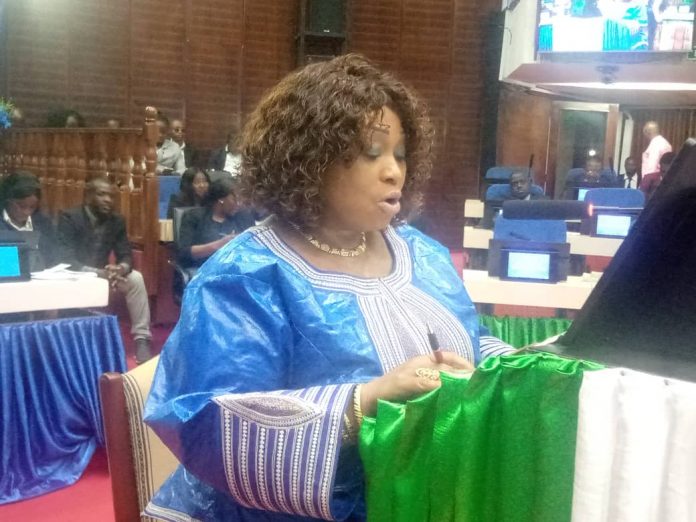 Following debates, consultations and amendments, the Parliament of Sierra Leone yesterday 15th November 2022 enacted into law, the Bill entitled “The Gender Equality and Women’s Empowerment Act 2022”, for the development of Sierra Leone.

The Bill went through proper scrutiny, amendments, public consultations with partners and civil societies amongst others, before it was passed into law.

Dramatically, after the passage of the essential Bill into Law, the Leader of the Government Business, Hon. Mathew Sahr Nyuma asked some Members of Parliament to make statements in celebration of the passing of the Bill into law.

Chairperson, of the Gender and Children’s Affairs Committee, Hon Catherine Zainab Tarawallie, who also doubles as Deputy Whip of the Opposition APC party, expressed profound thanks to the Speaker of Parliament, Rt. Hon Dr. Abass Chernor Bundu and the entire Leadership of Parliament and colleague MPs.

“I am overwhelmed, I’m so happy” she maintained and went on to acknowledge the efforts of all those whose meaningful contributions made it possible for the Bill to be passed into law.

Also, the Leader of C4C in Parliament, Hon. Saa Emerson Lamina recalled his collaborative efforts geared towards women’s empowerment and about the important law, when he was working for a nongovernmental organization Cause Canada. He thanked all the former leaders and heaped praises on President Bio for his tremendous efforts in that direction. He expressed hope for good implementation of the law.

Acting Leader of NGC, Hon. Foday Mario Kamara acknowledged the efforts of the Minister and President’s political will toward women’s empowerment. He expressed regard for all those who started the turbulent journey including the dead. “Those who started but are dead, let us pray for them” he concluded.

President of Female Caucus in Parliament, Hon. Veronica Kadie Sesay expressed appreciation on behalf of the Women of Sierra Leone. She thanked President Bio for giving the political will towards the passing of the Bill into law. She bestowed praises upon the Leadership of Parliament, colleague MPs, the staff Members, the Speaker, the Minister, Civil societies, partners and other players.

“His Excellency told us, if you want it, go for it,” she disclosed and went on to say they have achieved it.

The Bill was piloted by the Minister of Gender and Children’s Affairs Madam Manty Tarawallie. In her felicitation, the Minister expressed sincere thanks and appreciation to President Bio for his tremendous support for the passing of the Bill into law. She commended the House of Parliament, her team and her partners. She assured the House that the law is going to be implemented.

The Speaker of Parliament said in his felicitation that history has been made by the current Parliament and by the Government led by President Maada Bio and especially acknowledged President Bio for the support towards women in attaining gender equality. He thanked all whose support made the achievement possible. He expressed hope for the implementation of the law.