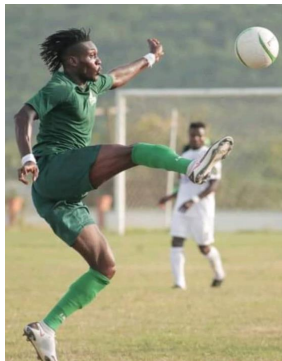 East End Lions FC yesterday confirmed the signing of Former Elmina Sharks Defensive Midfielder Abdul Nyamekye on a one-year contract with an option to extend for a further year.

The 25-year-old, who can also play at either centre-back or right-back, has represented Ghana at youth levels and has been playing with the Sharks for several years after coming through the youth system.

He also had a successful loan spell with Ghanian side Akyem Tafo Overcomers S.C. in the 2020/2021 season. The player said: “I had a good talk with the Chairman and the Coach.

First of all, it was very important for me to play this season and the coach gave me a good solution for that.

“The trainer seems to like how I play and really wanted me to come here, which is what convinced me to come.”

Nyamekye is set to join an array of new arrivals in his new and has expressed his delight at joining one of the biggest clubs in Sierra Leone Coach Zappa Koroma said: “He is a strong defender and is very good at building up the play when we play out from the back.”

“He will bring experience, stability leadership to the team.”