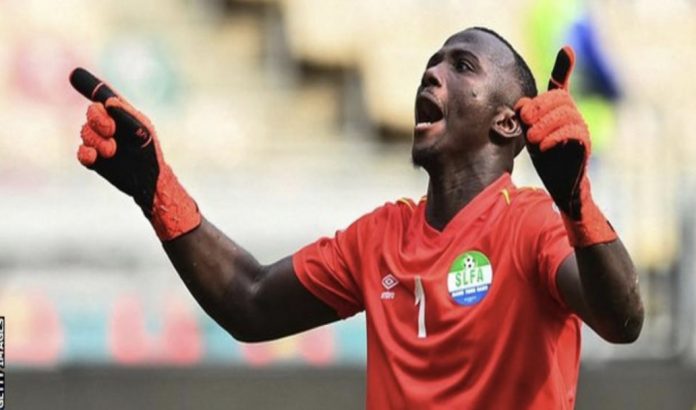 By Mohamed Fajah Barrie in Douala

The former African champions’ interest in Nbalie came following Nbalie’s impressive performance at the Africa Cup of Nations in Cameroon despite Leone Stars exiting the tournament at the group stage.

“I can confirm that Orlando Pirates have shown interest in me,” Nbalie told Sierra Leone Football.com.

He was named man of the match for Sierra Leone’s opening game in the tournament against Algeria after making several impressive saves to stop Manchester City’s Ryad Mahrez and teammates from scoring.

His performance against Ivory Coast was also impressive as he also made many saves including blocking Franck Kessie’spenalty to help Leone Stars secured a 2-2 draw.

“I have been approached by different people, different agents and clubs from Saudi Arabia, Morocco and Algeria, Austria and Germany.”

“But I have told them to talk directly to East End Lions. I have given them the contact numbers of the Chairman and coach and I believe my club will make the best decision for me.”

“I pray that I sign a professional contract in Europe because it’s my dream.”

Nbalie started his top tier league football with FC Johansen with whom he won the FA Cup in 2016, and played in the CAF Champions League the following year before moving to East End Lions.