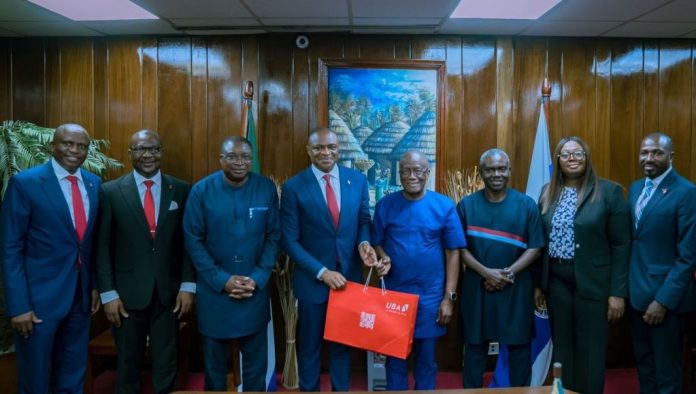 During his visit to the subsidiary, the GMD and other key executives from the Group had a series of meetings which included meeting with the Vice President of Sierra Leone Dr. Mohamed Juldeh Jalloh, the Bank Governor Professor Kelfala Kallon, the Nigerian High Commissioner to Sierra Leone His Excellency, Henry John Omaku (fcim), Board members, Management and Staff of UBA Sierra Leone and a cocktail dinner with some customers of the bank.

During his meetings with the stakeholders in Sierra Leone, the GMD expressed his profound appreciation to the Vice President, the Central Bank Governor, the Nigerian High Commissioner, customers, Board members, and staff of the bank for creating time to receive him and his team during his visit despite the tight schedules of their respective offices and businesses.

The GMD was delighted with the quality of discussions during the meetings he had which have provided an opportunity for areas the bank can further explore to improve the bank’s contributions to the socio-economic development of the Sierra Leone economy, promote regional trade and payment system within the Mano River Union (MRU) given the presence of UBA in all the 4 countries of the Union (Guinea, Liberia, Sierra Leone, and Cote d’Ivoire).

Mr. Alawuba went on to say that UBA as a bank remains committed to serving the good people of Sierra Leone with the very best of financial services and bringing to bear on the economy our experience as Africa’s global bank with a presence in four continents of the world: Africa, America, Europe, and Asia.

The GMD further noted that the bank is adding two more branches to its network in the country; in Kono and Kenema districts. These two districts will soon experience the bank’s digital and conventional banking products and services to further improve financial inclusion in the country.

In a meeting with members of staff at UBA Head Office at Charlotte Street, the GMD/CEO was delighted with the warm reception received from the staff. He assured them of his commitment to providing a quality working environment and investing in the right technologies that will improve staff performance and productivity.

Mr. Alawuba admonished staff to remain professional in providing excellent service to customers in line with the Bank’s Customer First (C1st) philosophy and also enjoined all to fully imbibe the UBA Persona (Simplicity, Responsiveness, and Goal Oriented) in the discharge of their duties and responsibilities in the bank.

The GMD concluded by thanking the Board, Management, and staff of United Bank for Africa Sierra Leone for their continued efforts in providing excellent customer services to the customers of the bank and the impressive business growth and the apparent Top of Mind Awareness of the UBA brand in the country.