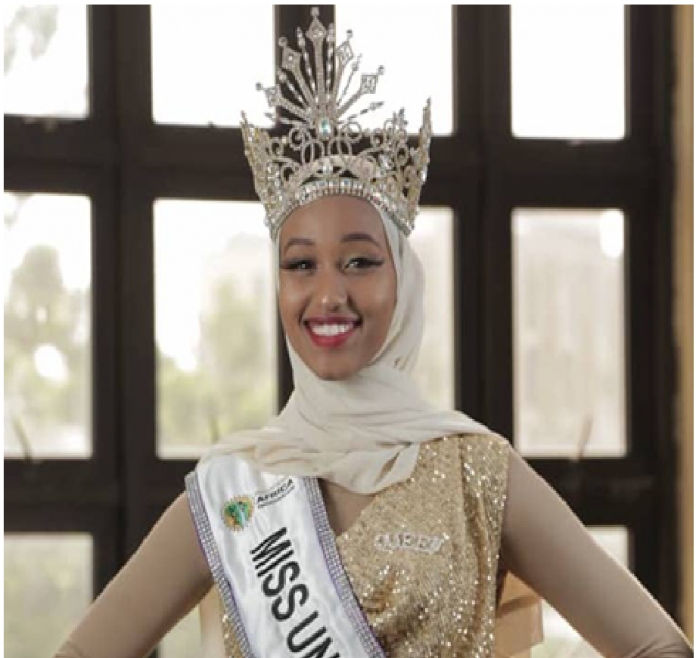 History was made recently as Somali Student, Adar Yusuf Ibrahim became the first ever Hijab wearing Muslim to win a continental crown in Africa.

Queen Adar won the crown at the 2021 Miss University Africa (MUA) beauty pageant with a prize including $50,000, a new car and being named a United Nations Student Ambassador.

Miss Ibrahim who represented Somalia at the ninth edition of Miss University Africa with 54 other African countries was announced the unanimous winner by the five member panel of judges.

Miss University Africa, which is the brain child of the African Personality Forum, is a non-bikini pageant comprising the 55 African countries, is aimed at promoting decent dress culture in Africa, promoting African unity, religious tolerance and celebrating the African woman.

The 2021 edition was held in Abuja, in partnership with the office of the Minister of State, Federal Capital Territory, Dr. Ramatu Tijini Aliyu had a 14 day boot camp with the grand finale held on 18th December, 2021 with several foreign ambassadors, a delegation from the African Union and top government officials in attendance.
Miss Ibrahim who was excited about winning the title shared her experience and plans for the future. “I am very excited to be crowned Miss University Africa and the first person in history to win an international crown for my country after much hardwork and support from the Somali community all over the world, this title is not for me but for my nation and its people who never give up on their dreams that Somalians can compete anywhere in the world if given the right opportunity”.

She also shared her plans to tour Africa as an advocate for women’s rights and free education on the continent. Her first trip would be to the African Union Headquarters in Ethiopia to share her vision before visiting other African countries.

She has since arrived in her country Somalia where she was given a rousing welcome and received by her country’s government and to be hosted by the country’s president.

She would hold the title for one year until a winner is crowned this year. Miss University Africa is the only pageant on the continent that brings together the 55 African countries.