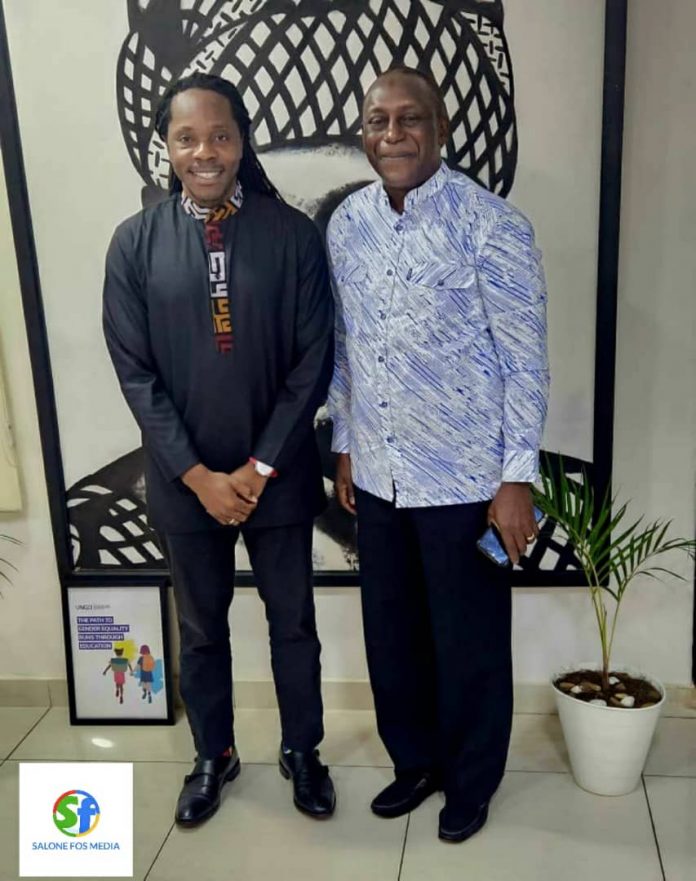 Honourable Dr. Kandeh Kolleh Yumkella (KKY) of the National Grand Coalition (NGC), yesterday 17th October, 2022 met with the Minister of Basic and Secondary Education, Dr. David Sengeh to discuss issues relating to the development and transformation of education in Kambia in particular and Sierra Leone in general.

Dr. Sengeh was happy that as a Member of Parliament, Dr. Yumkella fully embraced the Free and Quality School Education program in 2018, advocating for schools to be approved for financial support from Kambia.

He said himself and Dr. Yumkella spoke about his work in his community where he is building a digital hub/community library.

Hon. Dr. Yumkella and Dr. Sengeh, together with the Ministry’s School Quality Assurance, Monitoring and Resources Director, brainstormed ways of collaborating to ensure improved quality of education in that part of the country.

Minister Sengeh said Samu chiefdom in Kambia has been doing so well recently that their teachers are now getting national recognition for their work.

He said: “I particularly mention this engagement with Hon. Yumkella because it is so common for people who believe they are in “opposition” to seek to discredit FQSE if not even undermine it.”

He acknowledged that there are lots of challenges with equitable quality education all over the world and that Sierra Leone can always find things that could be done better. But that if people are not doing that hard work and just want to sit in their corners screaming, they might be part of the problem.

He concluded that education is so critical that if people are not asking their politicians what their vision for education is, then they might be doing disservice to their children and grandchildren.

“As a ministry and a government, we don’t have all the answers and certainly not enough resources but we have consistently invested in education and are now seeing some payoffs. We won’t stop until we hit 100% pass rates in Basic Education.” Dr. Sengeh closed.

In another development, Minister Sengeh has said pupils who passed the Basic Education Certificate Examination (BECE) will be interviewed this week and resume classes on Monday, 24th October, 2022.

He said one of the reasons for the rapid success of the Free Quality School Education Initiative, in addition to the political will and leadership of President Julius Maada Bio, is local and community level efforts.

Dr. Sengeh cited that his ministry had historically conducted school placements for students who pass transition exams only in Western Area, adding that they expanded nationwide and automated the process three years ago.

This year, he went on: “We went a step further – we had all placement meetings happen on the same day right across the country under the leadership of district staff. This saves us time, resources and enhances local ownership.”