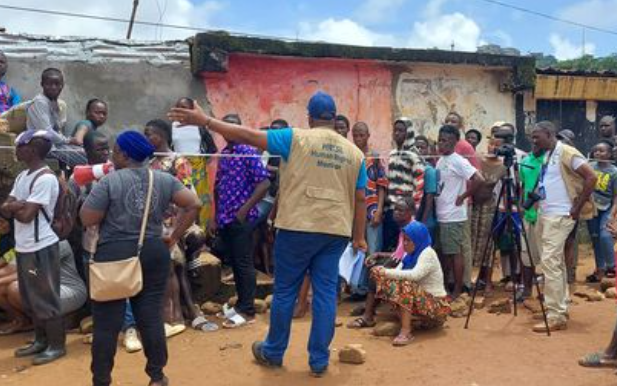 As the Human Rights Commission of Sierra Leone (HRCSL) continues to monitor the voter registration exercise by the Electoral Commission for Sierra Leone (ECSL) in Freetown and other parts of the country.

The Communications Team from the Directorate of Education, Communication, and Training visited some registration centers across Freetown to gauge the views of people in queues waiting to register and also engaged workers and party agents. The team also took some time to educate the people on the importance of the process.

The atmosphere was peaceful in all centres as people waited in queues to register. Some informed the team that it took them about four hours before they could register. Some even spent more than four hours. They however blamed it on the use of one laptop computer by the ECSL staff. They also said special preference for old people, pregnant women, and persons with disabilities affect the smooth running of the queues.

At Maffa Field in Lumley, the west end of Freetown, some first-time registrants expressed concern over the registration process. Steven Koivah said, for two days he has been shuttling between two centres in his community to register. He said at Voice of Youth, he was told that the computer that registers first-time voters was not available at the time. At Maffa field where the team met him, Steven said the long queues had made it difficult for him to register.

Yayah Conteh said he had been to the center for four days and had still not registered, “I woke up at 4:00 am just for me to get access, the process is very slow.” Yayah added that some people leave the queues and go back home because they could not wait. He said they sometimes have disruptions as some people fight their way to the front row.

Wellington community centre looked different, in a space of ten minutes about six people had successfully gone through the registration process. The people in the queue said the process is fast if registrants have all documents required. They said those who do not have proof of their birth certificates or other relevant documents were referred to the National Civil Registration Authority (NCRA) to crosscheck and get back to the centre.

First-time voters: especially those that will turn 18 years before June 24, 2023, said they are having difficulty to register because of documentation. They are required to present their birth certificate before they could be allowed to register and sometimes their information is rejected when inputted into the registration computer.

According to ECSL staff and party agents, the turnout at the centres was impressive amidst the challenges of single registration computers, long queues, and improper documentation by some registrants. The least number of registrants per day at the five centres visited was 120 people.