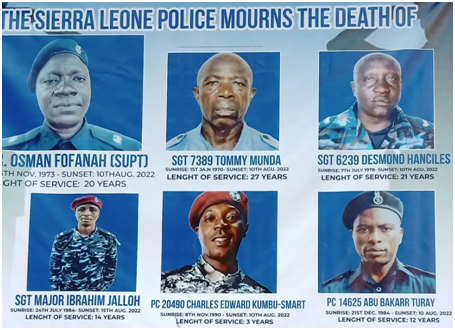 Empathising and responding to appeal from bereaved families during the State Funeral Service for the Sierra Leone Police (SLP) 6 fallen heroes of the August 10, 2022 insurrection, the Inspector General of Police (IGP) William Fayia Sellu, informed that they would make provision to accommodate recommendations from them for enrollment into the force as replacement.

According to IGP Sellu, the SLP was devastated on the 10 of August when news broke out about the death of their colleagues but however stated that they were console by the outpour of grieves from the public.

The SLP he said appreciated visits and calls of consolations from members of the public.

He appealed to the bereaved families to take courage and believe that it was destined to happen that way as per religious doctrine.

He assured that the SLP would do everything within it reach to bring perpetrators of the heinous act to book.

He disclosed that as a force, they were working with International partners to ensure Sierra Leoneans living in their comfort zones abroad and causing problems back home are extradited to face the law.

IGP William Fayia Sellu admonished members of the SLP not to be deter by the death of their compatriots but to be emboldened in enforcing the laws, defending democracy and strengthen their resolve to continue to move on to defend lives and properties of residents of this country.

Meanwhile, the turnout to grace the state funeral service of the fallen police officers was dubbed by viewers as the largest population ever in the history of the force.