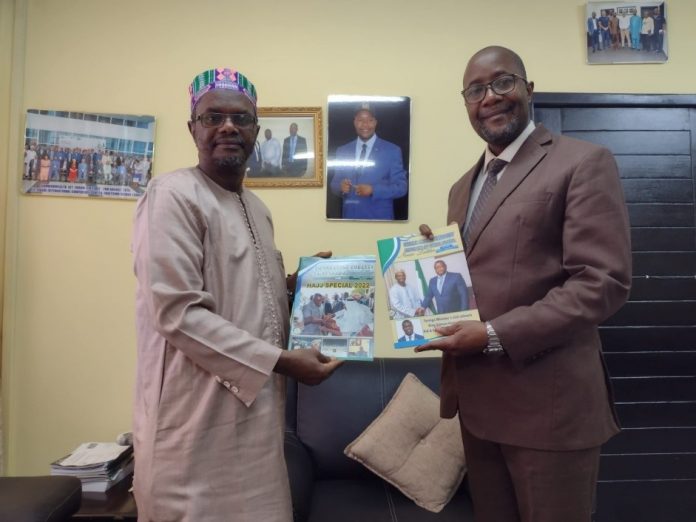 The Ambassador Extra-ordinary and Plenipotentiary of the Republic of Sierra Leone to the Kingdom of Saudi Arabia, Dr. Ibrahim Jalloh yesterday September 15, 2022, during a courtesy call on the Minister of Information and Communications, presented copies of two editions of the Embassy’s newsletter.

Ambassador Jalloh, while presenting copies of the newsletter of the Sierra Leone Embassy in Saudi Arabia, said the first edition gives a detailed account of the bilateral relations between Sierra Leone and Saudi Arabia, the Organisation of Islamic Cooperation (OIC), and Oman. He said it also features the visit of the Minister of Foreign Affairs and International Cooperation, Professor David John Francis, to the Kingdom. The second and latest edition, he said, gives a comprehensive coverage of the 2022 Hajj and an insight into the differences between Hajj and Umrah. He said other issues covered include the recent visit of the Minister of Labour and Social Security, Hon. Osman Alpha Timbo, meant for the signing of two Labour Agreements between the two countries.

The Ambassador commended the Government and Minister of Information for assigning Abubakarr Bah as Information Attaché to the Sierra Leone Embassy in Saudi Arabia, describing him as a very hardworking staff.

Responding, the Minister of Information and Communications, Hon. Mohamed Rahman Swaray, commended the Ambassador for the courtesy call. He said he was very pleased to receive the copies of the newsletter. The Minister also commended the Information Attaché Abubakarr Bah and encouraged him to keep up the good work.

Copies of the newsletter were also presented to the Deputy Minister of Information and Communications, Solomon Jamiru.

Ambassador Jalloh earlier this week presented copies of the newsletter to the Minister of Foreign Affairs and International Cooperation, Professor David Francis, and top officials of the Ministry, the Minister of Social Welfare, Madam Baindu Dassama, her deputy, Mohamed Kella, as well as the Ministry of Labour and Social Security.

Ambassador Jalloh was accompanied by the Information Attaché of the Embassy, Abubakarr Bah.

In another related development, the Information Attaché of the Embassy, Abubakarr Bah on behalf of the Ambassador presented copies of the Newsletter to the Chairman of the Independent Media Commission (IMC), Dr. Victor Massaquoi and the Sierra Leone Library Board in Freetown.

The Sierra Leone Association of Journalists (SLAJ), the Universities and the Library of the Sierra Leone Parliament would also be given copies of the two editions of the Embassy newsletter.