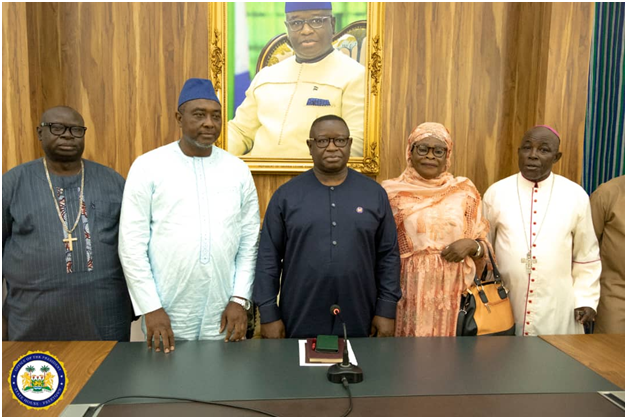 Inter-Religious Council of Sierra Leone has condemned the bloody August 10 violence in some parts of Sierra Leone and further urged the authorities to institute a thorough independent investigations to bring violators to book.

The Council made this call during a meeting with President Dr Julius Maada Bio who engaged the leadership of the Council as part of his wider engagements with key stakeholders on peace and national cohesion in the aftermath of the August 10 fatal violence.

President of the Council, Archbishop of the Freetown Diocese, Bishop Dr Tamba Charles said they were proud and pleased that they had been engaged and consulted by the president on all national issues.

He said he was reminded that they were the first group to strongly condemn the events of August 10, 2022, and that they had just concluded a fervent prayer and fasting exercise for the return of lasting peace through dialogue on national peace and cohesion.

The clergy also stated that the government should improve on its communication so that public officials could be more easily accessible to key stakeholders in mapping out effective ways to break the flow of misinformation. He added that it was also important that opinion leaders did not disseminate misleading information.

Secretary General of the Inter-Religious Council, Sheik Alhaji Ibrahim Barrie said they were grieving with the president, but revealed that the event was also a demonstration of how they as religious leaders had failed to tailor their messages on the importance of peace and the reward of sinful acts.

“Religious leaders must go back to the drawing board and improve on their sermons to instil the fair of Allah and the day of judgment in their congregations,” he said, adding that clerics would also need to remind their followers of God, that all sinful acts committed against God were forgivable, but that which were committed against man could not be pardoned except on judgment day.

The Council was informed by the President Bio that the largest representative inter-faith organization in the country, that his government’s financial assistance to importers during COVID-19 to ensure the availability of essential goods, as well as the implementation of remedial measures to alleviate the suffering of civilians, particularly the poor, was very huge.

The President further told them that the fact that he has announced election dates a year before is an indicator that he not in governance to buy political time. He said the protesters were aiming at getting him out of office, but the responsible way to do that will be through an election, which is less than a year from now. He added: “The August 10, 2022 insurrection merely reminded us that few people do not believe in the democratic process, peace, and national cohesion”.

President described the Inter-Religious Council as one of his biggest partners in the development of the country, especially in the consolidation of peace and called on them to continue to serve as influencers of national peace and cohesion, given the respect they commanded in society.

Chief Minister, Jacob Jusu Saffa, said the President’s engagement with stakeholders and sector heads would continue as part of what the government had been doing in the last four years. He added that the process would be robust and constant in such a way that it would have no limit to the extent of engaging in discussions on peace, national cohesion and development.

Previous article
Mohamed Gento-Kamara Boosts Leone Stars B Team with $10,000 ahead of Match against Mali
Next article
Kei Kamara reveals the name of the first man behind his football journey as he celebrates Top 3 all-time goal scorers in MLS
News