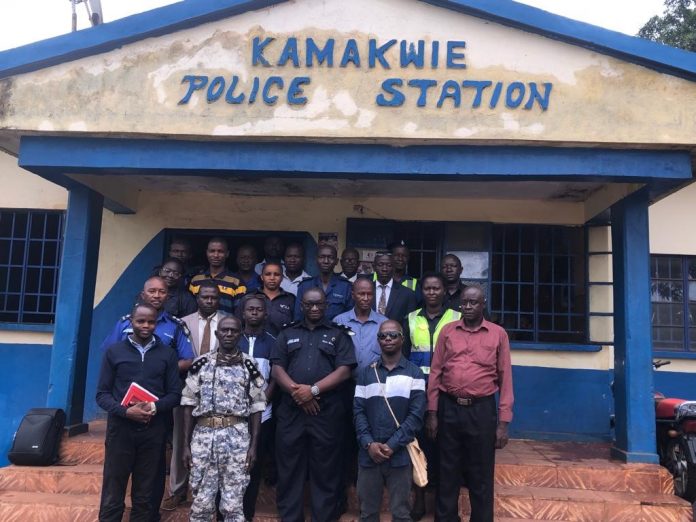 The Independent Police Complaints Board (IPCB) has concluded a three-day community outreach engagements with stakeholders, including the police, chiefs and the media in the North-West Regional districts of Port Loko, Kambia and Karene.

The outreach engagements, according to Amadu Femoh Sesay, Communications Officer is part of the Public Awareness-Raising and Sensitization Campaign which serves as a platform for the IPCB to not only meet and engage stakeholders but also to introduce the new officer in the North-West Region.

The event started on Monday 27th June in Karene District with an engagement with the leadership and personnel of the Sierra Leone Police (SLP) at the Kamakwie Police Station during their usual morning parade. Addressing the personnel, the Communications Officer informed them that the IPCB was created by the Police Council in 2013 in exercise of the powers conferred upon it by Section 158 of the Constitution of Sierra Leone.

He said the Board which is a civilian oversight institution is mandated to receive and investigate complaints from members of the public against police officers who are in conflict with the law. Mr. Sesay furthered that the Board is not here to witch-hunt the police but rather to work with the police to weed out police officers whose actions undermine public trust and confidence in the SLP.

He expressed gratitude to CSP Issa Kamara, Local Unit Commander (LUC) for the warm reception and informed them that the IPCB now has a new Regional Officer in the person of Khalil Sorie Kamara who would work with stakeholders, including the police. In his response the LUC thanked the IPCB for the engagement and assured the Agency of his commitment and that of the personnel in the Kamakwie Police Division.

The team also engaged Mohamed J. Kamara, Chiefdom Speaker of Sella Limba chiefdom. After listening to the team, he thanked the IPCB for the visit and assured of the chiefdom’s support and willingness to work with the IPCB.

Welcoming the IPCB staff, CSP Sesay said having a civilian oversight institution for the police is best practice in modern day democracy as it strengthens police accountability. He called on the IPCB to further intensify its public awareness campaign by regularly engaging the police and members of the civil populace.

Commissioner Kadie Samura disclosed that she is quite knowledgeable about the existence and mandate of the Board, adding that she once had an engagement with the institution.

On behalf of the Regional Commander, she assured the Board of their willingness to work with the institution in order to deliver on its mandate.

Similar engagements where replicated at the Port Loko, Lungi and Kambia Police Divisions.

The awareness campaign was concluded with radio discussion programmes in Port Loko city and Lungi on Advocacy Radio and Galaxy Radio respectively.