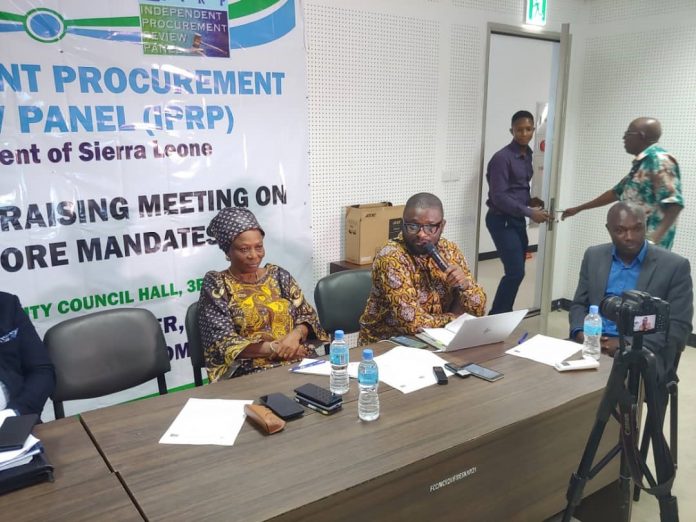 The Independent Procurement Review Panel (IPRP) has conducted an awareness raising meeting attended by stakeholders from the public and private sector, other stakeholder organizations and the media to create public awareness around its mandate and activities as well as create greater coordination with other Government Ministries Departments and Agencies whose activities are related to the mandate of the IPRP.

In her opening remarks Mrs. Cecilia Kai Kai a board member of the IPRP said that the core function of the IPRP is to accept complaints from aggrieved bidders in accordance with the provisions of the Public Procurement Act 2016.

The Director of Procurement Ministry of Finance Fodie Konneh said that public procurement is a critical driver in the execution of over 80% of Sierra Leone’s budget and it is central in the functioning of government operations.

He described the NPPA Act of 2004 and the repealed and replaced version of   2016 as legislations that seek to regulate the acquisition of goods works and service, and its provisions involves other players in the procurement process such as the bid opening committee, the evaluation committee, the procurement committee, the National Public Procurement Authority, Audit Service Sierra Leone, Parliament, the Ministry of Finance, Donors and the Independent Procurement Review Panel to enhance compliance value for money trust and competition.

He congratulated the Executive Secretary and Staff of IPRP on the strides they had made to improve the secretariat’s effective handling of complaints arising from procurement processes in Sierra Leone due to breach of the duties imposed on procuring entities.

He furthered that the complaint procedure captured in part 7 of the National Public Procurement Authority Act 2016 is comparatively more effectively implemented now than it had been before the tenure of the current executive of the IPRP and its staff .He continued that prospective complainants of are now more aware of their rights as per section 63 to 65 of the Public Procurement Act 2016 and are more likely now to protest decisions of the procurement Committee without fear that the continuity of their Businesses would be grossly affected .

He commended the improvement in the effectiveness of the IPRP in the past few years as it would increase public trust, donor confidence, effective competition and healthy economic growth.

He distinguished the regulatory function of the National Public Procurement Authority from that of the Autonomous and Adjudicatory role of the IPRP; i.e. specifically to be reviewing complaints emerging from procurement processes brought to its notice by aggrieved parties. He added that the first Port of Call for lodging grievances for breach of procurement procedure is the procurement authority.

He further emphasised that if such grievances are not addressed at the institutional level within five days then a formal complaint could be lodged by the aggrieved party to the IPRP.

Amara emphasised that it is at this stage that a collaborative approach between the IPRP and the Anti- Corruption Commission should be adopted in the sense that the IPRP reviewing complaints brought before and discovering that there are elements of corruption within the procurement process could refer such matters to the Anti-Corruption Commission because the 2019 Amendments to the Anti-Corruption Act empowers the Commission to  first discontinue and later investigate every procurement process that is marred by Corruption. He recognised the importance of the IPRP’S role because without any aggrieved Party lodging a complaint at the IPRP the ACC would not be aware of procurement processes that were marred with irregularities.

Amara therefore called for information sharing in real time between the ACC and IPRP especially in relation to instances of corruption arising from procurement processes.

The Chief Executive Officer of the National Public Procurement Authority Ibrahim Brima Swarray emphasised that if Sierra Leone is to move forward especially in its development stride she needs to take procurement issues very seriously. He however emphasised that in as much as it is important to have the Anti-Corruption Commission, Budget Advocacy Network (BAN) and Audit-Sierra Leone as institutions providing checks and balances which will prevent leakages in government spending , the NPPA is the only authority charged with the responsibility of regulating, monitoring, and advising the Government of Sierra Leone on procurement issues.  He said that in a span of four years the NPPA has been able to using section 14 (3) of the Act has been able to prevent the Country from going into bad contracts running to the tune of Le 1.3 trillion . He said this in itself has helped the work of IPRP and the Anti-Corruption Commission. He however emphasised the fact that procurement is a professional discipline which must be audited by persons with the necessary professional expertise in the field of procurement.

The Chairman of IPRP Dr. Emmanuel Saffa Abdulai said that after he took over the Chairmanship of the Panel it had no office space of its own. He said the situation he inherited was one in which IPRP was being housed within the office space of the NPPA which is an authority over which it has oversight authority which was in appropriate for the autonomy which is a hallmarks of the essence of the Independent Procurement Review Commission. He said this was all the more reason why the Executive and its staff under his Chairmanship made it a priority and security an office space of its own.

He said that the Office of the IPRP is now located at No 3 Wellington Street Freetown and it is open to accommodate persons visiting it with concerns surrounding procurement issues.

He furthered that prior to 2019 the IPRP had only done 13 cases in 10 years, but post 2019 after the inception of the current tenure under his chairmanship the IPRP has done 13 cases in three years out of which the Panel has reversed procurement processes that it had investigated to have been fraught with irregularities in the Ministry of Health, National Revenue Authority (NRA), Sierra Leone Police (SLP) etc.

According to Chairman Abdulai the procurement process commences with a bidder making a bid. If a bidder is dissatisfied because of certain reasons he first approaches the procuring entity through its internal grievance resolving mechanism. After 14 calendar days a ruling in given with which the complainant party is still dissatisfied, then the IPRP as the second layer of complaint is informed about the complaint .He said that IPRC will review the complaint after forming a pane  requesting for all the documents from the institution all the parties including the biding document.

He continued that once a complaint has been lodged in respect of a particular procurement process it is discontinued and investigated by the Panel.

The meeting was climaxed by a question and answer session.