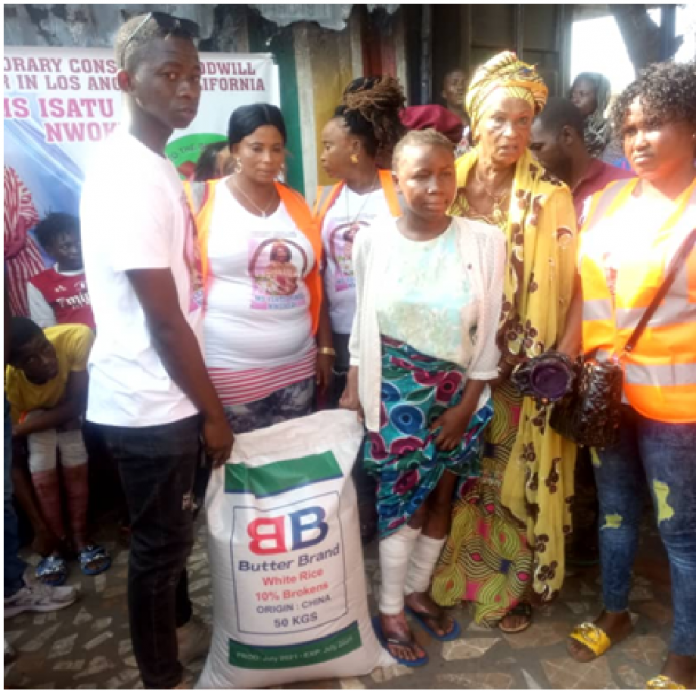 Isatu Timbo, a Honorary Consul and Goodwill Ambassador living in Los Angeles California has donated over 200 bags of rice to fire victims and also to relatives of those who lost their lives at the Wellington inferno which occurred some two months back.

The donations were targeted at four (4) different locations, which were, the PMB Wellington Community where the unfortunate incident occurred, the Rokupa Government Hospital at Wellington, the Connaught Hospital and the 34 Military Hospitals respectively.

Speaking on behalf of Isatu Timbo who resides in the United States of America, Momodu Timbo a younger brother to Isatu Timbo and also the coordinator for the said donation, explained that the donation was done by Isatu Timbo out of humanitarian feelings for the burnt victims, adding that when the unfortunate incident occurred, Isatu Timbo shipped a whole container full of medical supplies worth 1Million Dollars to the government of Sierra Leone to cater for the burnt victims.

Speaking on behalf of the beneficiaries, Mohamed Conteh expressed thanks and appreciation to Isatu Timbo for her timely kind gesture and prayed that the Almighty God will continue to bless and elevate her in all that she does.

Receiving the donations on behalf of the burnt victims admitted  at the 34 Military Hospital, Officer in Charge of the hospital Captain David Fofanah appreciated the donor while pointing out that some of the fire victims have been discharged while others are coming for treatment.

Matrons of both the Connaught Hospital and the Rokupa Government Hospital at Wellington thanked the donor and expressed gratitude for such kind gesture. They both promised to continue doing their best to ensure that all the fire victims are discharged.