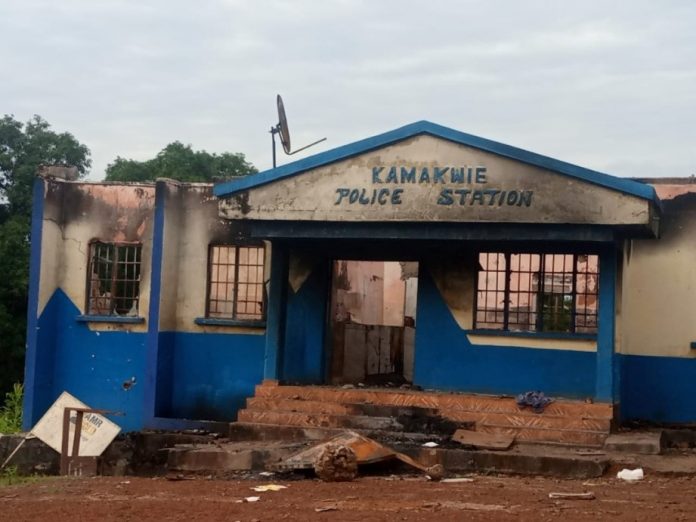 The bloody August 10, 2022 violence in Kamakwie town left the township’s main police station grounded and dysfunctional. The violence left the Station and barracks completely burnt down by violent protesters.

According to the Local unit Commander (LUC) of the Station Chief Superintendent of Police Lansana M. Koroma, the Police Station is presently housed in an unfinished building, which has been temporarily made available to them by the Drivers’ Union in Kamakwie.

He narrated how he is currently working towards boosting the moral of his personnel and finding ways to encourage those who had abandoned their posts in fear of their lives and are still afraid to return to base, to have confidence and come back.

“When I arrived here, it looked like a post war-like scene. Many citizens had run away for fear of their lives and there was little trust between the Police and the citizens but as I speak, we have been able to restore peace and calm through a series of community-based dialogue sessions.” LUC Koroma said.

Paramount Chief of Sella Limba chiefdom, Kamakwie, Karene district, PC Alimamy Bockarie, described the incident as unfortunate and unacceptable. He said he was in Makeni when the riot erupted and he had to return quickly because the situation was out of control.

“When I arrived from Makeni, the Police station was on fire, the remains of two police officers and one civilian were lying where they have been apparently murdered by the irate protesters” he narrated.

The destruction of the Police Station and the Barracks, PC Bockarie said, is a big loss for the community, as those structures were built during the regime of the late President Ahmed Tejan Kabbah and they will be hard to replace.

He said before August 10, they had been talking to their people to refrain from violence and avoid any unlawful protest.

He said he was shocked about what happened in his chiefdom, adding that many people have deserted the chiefdom in fear of arrest and persecution.

He assured that there are ongoing efforts towards bringing them back, adding that as authorities in the chiefdom, they are behind the government in pursuing the perpetrators.