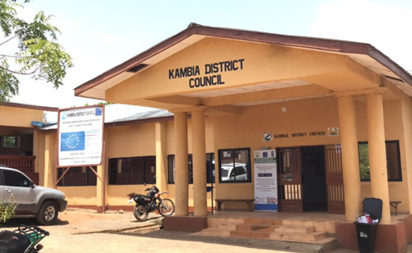 The Kambia District Council Tax Revenue for the year ending 2021 increased by 820%, compared to 2020 while Non-Tax Revenue decreased by 35%.

All of the tax revenue stream increased with market toll and property tax received the highest increased (Le431.8 million and Le441.2 million respectively).

“The investment and revenue potentials of Kambia district are yet to be tapped; that can only happen with unity and good citizenship”. Those were the exact words of the Chief Administrator Kambia District Council, Edward Alpha.

Alpha made this statement during the official launch of a study titled “Budget and Own Source Revenue Tracking for Kambia district” conducted by a coalition of Civil Society Organisations comprising Budget Advocacy Network (BAN), ABC-Development and ActionAid Sierra Leone (AASL) with funding from the European Union under the “Action for Inclusive Social and Economic Service Delivery” project in Kambia district.

The Kambia District Council has made massive progress in resuscitating its own source revenue hope and this has impacted significantly on the tax collected in 2020 and 2021.

Comparatively, the expectation for money by the Kambia District Council in 2021 climbed by 232% while the actual revenue collected in 2021 increased significantly to 189%.

This according to the Report could be attributed to a number of factors including the revenue mapping study conducted by the “Action for Inclusive Social and Economic a Service Delivery project in Kambia which identified all the untapped revenue streams in the district and some appropriate recommendations were proffered for the actualisation on of such potentials.

The role played by Civil Society Activists local authorities and the media in keeping with transparency and accountability measures, raising awareness on the need for citizens to pay their taxes and the judicious use of public resource are key in helping to build trust between the citizens and the Kambia District Council.

The report highlighted a few challenges that are militating against the steady progress of the Kambia District Council and these includes but not limited to increase transparency and accountability in the process, Ministry of Finance to ensure timely allocation of funds to local councils, Strengthening of Councils’ M&E department, establishment of feedback mechanism, mobile personal address system, Paramount chief meetings among other key recommendations.

The Report from CSO came at a time the Kambia District Council was recognized with an unqualified audit report by the major state audit firm, Audit Service Sierra Leone ASSL for its compliance to Public Financial Management procedures.

The reformation stages of the Kambia District Council started about 3 years back after the transfer of the current Chief Administrator, Edward Alpha who inherited a Class C district that has now been upgraded to a Class A district following robust management systems put in place to restore an inherited battered system.