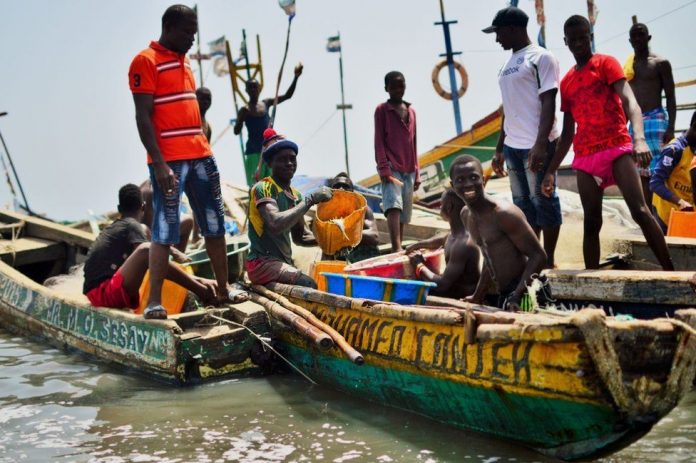 Boat owners at the King Jimmy Fishing Wharf in Freetown have cried over the high increment of fuel price in Sierra Leone.

Mohamed Lamin Sumah, Chairman of the King Jimmy Wharf urged the Government of Sierra Leone to see how best the price of fuel can be cushioned, which according to him will help them as boat owners to be able to make some profit and savings for their families.

He said sea transportation is an important means of movement, adding that it also helps in bringing sea foods and other basic commodities to land for consumption.

Mohamed said the King Jimmy wharf is a center for receiving various food commodities from the interior of the country and that it is also essential in the promotion of trade and commerce.

He said: “We have been doing fine during the previous years as business people but the issue of fuel increment has forced our business to face huge challenges that are affecting us and the business sector in the country”.

He said most boat owners have not been able to do their normal business activities at the wharf since the increment in the pump price, while begging government to save the situation.

The two constitutional instruments were tabled last week before parliament alongside the Public Elections Bill of 2022. The two amendments sought to make changes in constitution before the Public elections bill can be enacted. The first amendments done in subsection two and eight of section thirty two was to add the number of commissioners for the Electoral Commission of Sierra Leone making it five commissioners and the chairman. The other amendment done in subsection eight (8) of section thirty two (32) changed the word “misbehavior” which was considered by MPs as misdemeanor to the word “gross misconduct” which they believe is appropriate and in line with existing acts that is set to remove Paramount Chiefs, Judges, Auditor General among others.

While debating to amend the said instrument, Hon. Abdul Sulaiman Marray Conteh, the chairman of the Legislative committee admonished colleagues that they are not asking for anything new especially when there the North-western region without a commissioner. He added that even the change of the word “gross misconduct” is necessary to meet the standard of existing legislations. However, Hon. Ajibola Manley Spain of constituency 124 called for an explanation of the difference between “misbehavior” and “gross misconduct” for better clarification. He also asked that the section on the electoral commissioners should not be left open. In his own submission, Leader of Government Business noted that there was no constitutional instrument amending subsection 2 and 8 of section 32 when the 2012 Public Elections Act was passed which is why they want to right the wrongs of the past. Hon. Sengepoh Solomon Thomas also challenged that the opposition should provide an instrument if it is available but Hon. Chernor Bah, Leader of opposition APC said laws are only relevant when they are triggered and therefore they should not try to blame the past regime because the leader of government now was in the parliament when the 2012 Public election Act was enacted. He added that there is no perfect law and that they should focus on what is before them. He ended by noting that the law was there but no commissioner was sacked which made the law irrelevant. In his own argument, Hon. Hassan Sesay, Chief Whip asked for specificity for law on the number of commissioners and when need arises they can always amend it. Hon. Bah also supported the chief whip by stating that they will support the amendment but with specific number on the commissioners and they must make a decision on definition of the word “gross misconduct”.

Ending the debate, the leader of government business encouraged opposition MP to come to a consensus in passing the constitutional instruments while applauding MPs for proving the wrong perception that MPs were paid for them to pass the law. He recommended that the definition of “gross misconduct” must be left for a tribunal to determine that as stated in the 2012 Public Elections law.

Responding to the numerous concerns raised by MPs, the Attorney General and Minister of Justice Mohamed Lamin Tarawallie encouraged MPs to ensure the law is harmonized with other laws like the chieftaincy act and others. He furthered that the provision on the number of commissioners will not be abused at all.

The house ended up passing the bill “Constitutional amendment of 2022” through a unanimous vote of 2/3 majority. Although there was a controversy on how the voting should be done when the speaker put the question, a motion was adopted for it to be done by collection of voices and if there is controversy then voting can be done. In the end the provisions of section 108 of the 1991 constitution was followed to pass the bill without any dissenting view.

Unfortunately, the other amendment in paragraph B of subsection 1 of section 96 was unanimously not passed by parliament. The said amendment sought to change the resignation date from twelve months to six months for anyone who intends to contest for MP holding a public office.

In another news, power outage interrupted the proceeding of parliament when MPs continued debate on the Public Elections Bill of 2022 which made speaker adjourned the sitting for Wednesday 13th July 2022.