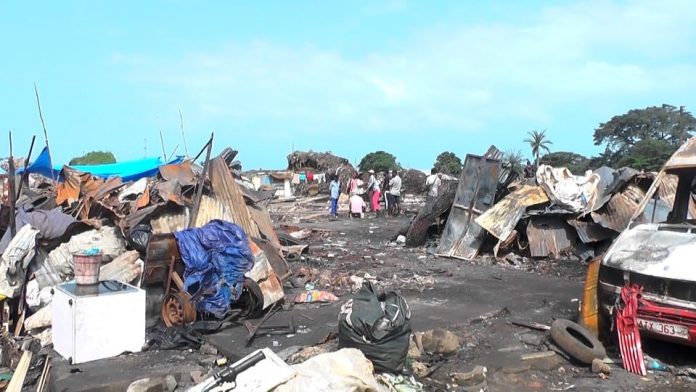 The recent fire outbreak at Janet Lane in Kingtom, Freetown has left over 32 households homeless and properties worth millions of leones destroyed.

One of the residents in the community, Nenneh Bangura said the fire started at around 7pm and lasted for about 2 hours.

“The incident was an impromptu one, we were unable to save anything,” she said.

Daniel Amara, Chairman of the Kingtom Community said residents, especially vulnerable women and children are suffering as they have no place to call home.

“We are grateful to God because there is no loss of life but I am in great pains because I lost two of my cars in the incident and other people also lost properties worth millions of leones,” Daniel said.

Hawa Kamara another resident said that they are really suffering after the fire left them with nothing. She said their businesses, monies and properties are all gone.

Legal Representative for Fire Force Sierra Leone, Bintu Fatmata Kamara said the fire was caused by an unattended stove that was being used by one of the residents.

She said the spark from the cooking stove came in contact with flammable materials and a vehicle parked around with petroleum products, which according to her caused the fire.