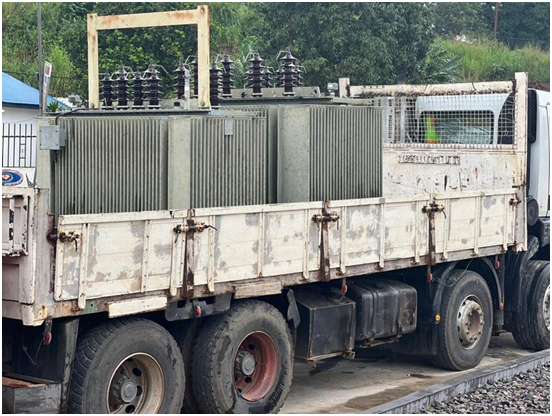 Sierra Leone’s Minister of Energy, Alhaji Kanja Sesay, has continued his aggressive and impressive pursuit of the realisation of the energy dreams of President Julius Maada Bio by facilitating the delivery of two power transformers and a huge quantity of volt-switch gear or breakers to the the people of Kono district.

The move is consistent with the immediate plans of the New Direction administration to connect the district to the TRANSCO/CLSG interconnections with a view to enabling the city of Koidu in particular and the district in general enjoys uninterrupted electricity.

Welcoming the team to Kono district, Chairman Council of Kono Paramount Chiefs, PC Emmanuel Foyoh, described the consignment as massive, noting that electricity was one of the daunting challenges that the city and district had been faced with.

He praised President Julius Maada Bio for always thinking Kono, adding that his people were relishing the prospects of getting connected to the CLSG grid which would in turn have significant positive social and economic effects on the lives and livelihoods of the people.

Permanent Secretary at the Ministry of Energy, Raymond Gbetuwa, said they had delivered two power transformers and some gear to the people of Kono in fulfillment of a promise President Julius Maada Bio had made to them in respect of providing them with affordable and reliable electricity.

Mr. Gbetuwa drew the attention of the people to the ongoing erection of poles and the stringing of wires to help in the evacuation and distribution of quality electricity to homes and business centres.

He assured that with the speedy rate at which the different components of the project were being implemented, Kono would soon be connected to the CLSG interconnections.