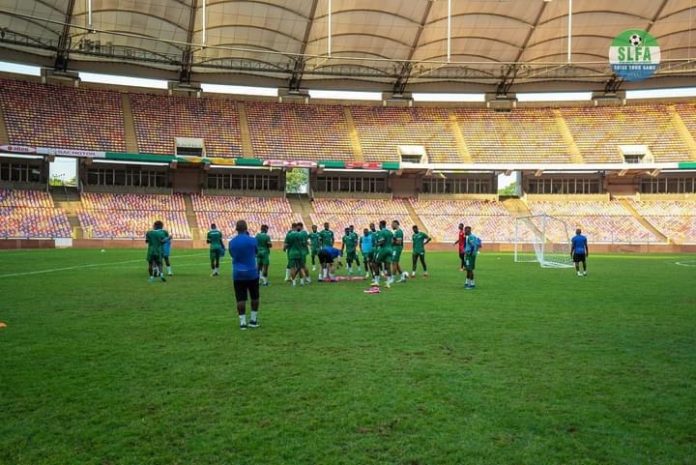 By David Remie Wilson in Nigeria

Sierra Leone is in Group A alongside Nigeria, Guinea Bissau and Sao Tome

Sierra Leone Head Coach, John Kiester in an exclusive interview with AYV’s David Remie Wilson in Nigeria said the Team is in high gear and ready to face the Super Eagles.

“I have invited few new players who have not yet play for Sierra Leone in a competitive tournament like the AFCON to be part of the team, they are: Ibrahim Sillah, AmadouBakayoko, Kamil Conteh, Kallum Cesay, Jonathan Morsayand Donald Kamara” Kiester stated.

The last encounter between Sierra Leone vs Nigeria was about 8 months ago in the 2022 AFCON Qualifiers when Sierra Leone held a four all draw in Nigeria and goalless draw in Freetown.

Sierra Leone’s next match will be against Guinea Bissau on 13th June in Guinea.

However, Nigeria with its new head coach is expected to create impacts after the team lost its two friendly matches against Ecuador and Mexico few weeks ahead of their AFCON game against Sierra Leone.

The Super Eagles after failing to qualify for the 2022 FIFA World Cup, shifts attention to the upcoming AFCON qualifiers.

The first start in the Federal Capital Territory, Abuja against the Leone Stars of Sierra Leone on today June 9, 2022.

However, the Confederation of African Football has appointed Ivorian officials to take charge of today’s encounter in Abuja, with Ibrahim Kalilou Traore as referee.

Moukaila Nassam Adam from Ghana will be match commissioner while Serge Paulin Samuel from Burkina Faso will serve as referee assessor. See page 15 for photo news from the training session.