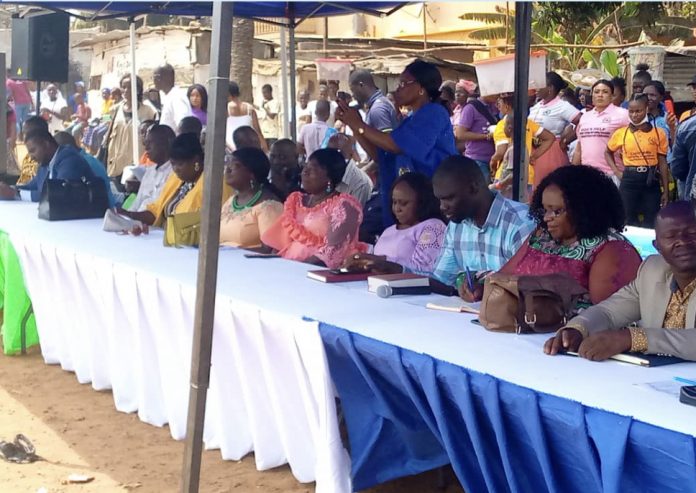 The Lady Ellen Women’s Aid Foundation (LEWAF) has completed six months training for 1,500 women as Community Based Justice Advocates on the Gender Laws.

This was revealed during an Open Field Legal Education Exhibition held at Calaba Town, east end of Freetown, marking the International Women’s Day on 8 March 2022.

Mohamed Bobor Jalloh is the Executive Director of LEWAF. He said the Community Based Justice Advocates will be helping other women in their respective communities by educating them on the laws to prevent abuses and moreover help those who are abused to seek justice.

The exhibition was climaxed with a skit educating people on how victims of Sexual Penetration could contact the police, penalties for relatives attempting to compromise sexual penetration cases, how women who are subjected to domestic violence seek justice, how women can use the law to stop relatives of their deceased husbands from denying them their rights on issues of inheritance in the name of customary law and practice.

Chairperson for the exhibition who doubles as Chair for the Human Rights Commission, Sierra Leone (HRCSL), Patricia Ndanema speaking on Women Builders seized the moment to recognized two former commissioners of the HRCSL – Justice Jamesina King and Yasmine Jusu-Sheriff – for their outstanding role in the passage of the Gender Laws which she underlines offer protection for the rights of women.

She praised LEWAF for organising the Exhibition, noting that women suffer abuses due to lack of education and as a result do not make use of the laws. She called on the women to henceforth make use of the laws and noted that HRCSL is always at their disposal should they need help.

Executive Director of Legal Aid Board, Fatmata Claire Carlton-Hnaciles was also part of the event. She called on women to stop suffering in silent by ‘speaking out, speaking loud and speaking clear’ on abuses they are subjected to or when they are not valued by their partners, relatives and others.

She further called on the women to fight for equality, demand respect, contribute to the upkeep of the home, know when a partner mean well and beware of men who come around to exploit pretending they are in love but leave as soon as they have milked them dry.

She said women have committed serious offences such as murdering their husbands because they have refused to speak out when they were abused by these husbands, adding that women have defaulted in repayment loans because their male partners have stolen the money and abandoned them to grapple with the consequences.