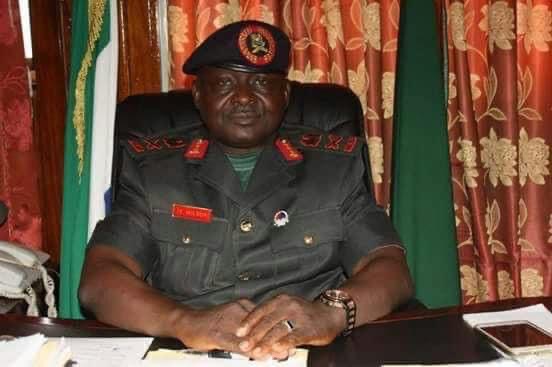 He was born on 27th April 1960 in Wilberforce in the West End of Freetown. He started Primary school at the Murray Town Army School in 1964 and completed primary schooling at Service Primary School in 1971. In the 1971/72 academic year gained admission at the Services Secondary School at Juba Barracks.

After taking O’Level exams, he subsequently went to the Milton Margai College of Education in 1980. In 1983 he completed the Higher Teacher Certificate. In 1984 became a cadet officer and proceeded to the Royal Military Academy Sandhurst where he did his officer cadet Training complete the course in 1985.

On returning home as a second Lieutenant, he was posted to the Armed Forces Training Center (AFTC) formerly the BenguemaTraining Centre, Waterloo as platoon commander.

In 1990 he was among the first batch of officer from the Sierra Leonean battalion (LEOBATT1) who went to Liberia as part of the West African peacekeeping initiative ECOMOG he was appointed Adjutant of the Benguema Training center and later posted to the Army Headquarter (AHQ) as public relation officer (PRO).

He served briefly as PRO before proceeding to Kaduna for Junior Staff Training at the Armed Forces Command and Staff College In Jaji. He became Battalion Commander of 18Bn in Kenema, in the East of Sierra Leone in 1994.

This tour of duty during the civil conflict it lasted for 6 months after which he was reassigned to the AHQ and appointed Military spokesman. In 1997 he proceeded to Fourah Bay College, University of Sierra Leone to study Mass Communication, unfortunately could not complete his course of study owing by the Armed Forces Revolutionary Council (AFRC) led by Major Johnny Paul Koroma.

After the interregnum, he was appointed media operation officer in 2002, thereafter CO of 2Bn Daru, he worked at the Ministry of Defence as Military Assistant (MA) to the Deputy Minister of Defence Ambassador Joe C Blell in 2004, and he proceeded to Ghana for his Senior Division Command and Staff College Course.

Concurrently, he studied at the Ghana Institute of Public Administration and Management. (GIMPA) on his return in 2005, he was posted to the Armed Forces Training Center (AFTC) as commandant in 2006; he became the Brigade Commander 3Bde and subsequently promoted to Colonel.

While serving as BC be proceeded to Mali for BC Peace Keeping Training at Malian Peacekeeping School. From 2006-2008, he studied at the Institute of Public Administration and Management (IPAM) University of Sierra Leone were he obtained his Master Degree in Public Administration on completion of his course and tour of duty as BC he was posted to the Ministry of Defence (MOD) and appointed Director Defence Public Relations and Information.

He acted for close to a year as Director of Operator at the Ministry of Defence before proceeding to the National Defence College Abuja in 2010 and emerged as the best foreign student.

In 2012 awarded the award of Military officer of the year(AWOL AWARD) promoted to the rank of Brigadier General in July 2012 and appointed Joint Force Commander.