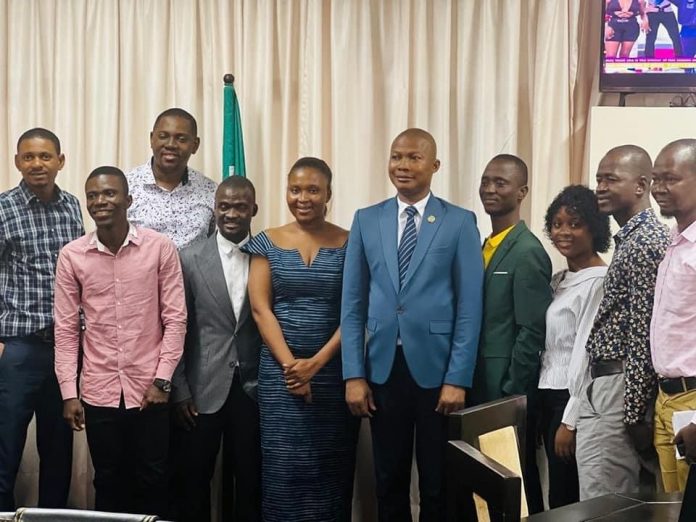 The Executive of the Mass Communications Students Association (MACOSA) has on 7th of September 2022, made a thank you visit to the Chairman of the Petroleum Regulatory Agency (PRA) Baluwa Koroma for donating computers to the department and also given a public lecture on the activities of the agency.

In his presentation, the President of the Mass Communications Students Association Mohamed T. Massaquoi, expressed undying elation to the Petroleum Regulatory Agency boss for his generosity to the department and also the public lectures delivered. He added that he was very moved by the lectures delivered by the PRA boss which precipitated the executive to make a courtesy visit on the PRA boss.

Mohamed Massaquoi also commended the PRA boss for the tremendous work he has been doing in the petroleum sector. He assured that the department would be partnering with the agency so that the activities of the agency would be visible across the country.

He also used the opportunity to inform the PRA Boss that one of their friends is critically ill and needs urgent medical attention.

“we have had people from other Ministries, Departments and Agencies but your own visit left an indelible mark at the department”, he said.

On his part, the PRA Boss Baluwa Koroma also expressed profound thanks and appreciation to the executive for visiting him and commending him for his service to the nation. He also commended the executive for soliciting support for their colleague who needs urgent medical attention. He added that it is very rare nowadays to see students soliciting support for their colleagues. He assured the executive that he has taken note of their request about the internship space adding that, instantaneous consideration would be made for such.

“I have passion to create leaders and not managers and I want to assure you guys that we will strongly look into the internship request you made”, he said.

Brima Baluwa Koroma also highlighted that their challenges over the years is the outreach but have put robust mechanisms in place in ensuring that the PRA is accessible and visible across the country. He reminded that he provided free fuel for Motor Bike Riders in Bo and also football kits as part of his generosity. He concluded by assuring the executive that the praise showered on him would not make him relent, but rather motivates him to do more for the agency and for the country by extension.