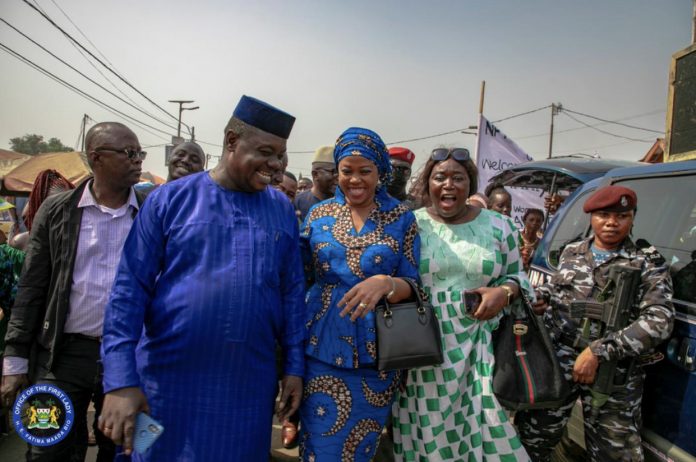 First Lady of Sierra Leone, Fatima Maada Bio over the weekend received an unprecedented grand welcome in the opposition ‘stronghold’ of Bombali district, when she arrived in that part of the country on Friday February 11, 2022.

Mrs. Bio visited Makeni to appreciate the people of the North/Eastern Region for their continued support to President Bio and the SLPP party.

Welcoming the first lady, District Chairman of Bombali, Alhaji Alpha Kamara expressed appreciation over what he described as the selfless work and interventions of the First Lady in the district and across Sierra Leone.

He assured the first lady of their unflinching support towards the President’s development agenda.

The First Lady Fatima Maada Bio in her keynote address, expressed appreciation to the people of the North for the grand welcome and continuous support for the president’s agenda.

She said the Office of the First Lady, together with the National Women’s Wing, JMB Women’s and Associates and by extension, the SLPP will sign a contract with the women by pledging their commitment to serve the women of this country for a better 2022.

The first lady added that the president has relieved the women of the burden of paying school fees for their children through the “Free Quality Education” program as most parents, especially women, don’t have to worry about meeting cost expenditures during the academic year.

The first lady emphasised that the money is free and they will not be asking for anything in return.

She ended by appealing to the women of the North Eastern Region, to continue their selfless support to the president as he has so much in store for the women of this country and for national development.

The Deputy National Chairman of SLPP, Alpha Mohamed Kallon said what the first lady has done for the people is to bring them together.

“When the women in a country are empowered, you will have an empowered country,” he noted.

The National Women’s Leader, Hawa Foray in her statement, described the first lady an exemplary example to all mothers, while assuring the women that they are the ones that own the party. She further urged them to continue to hold on and support the SLPP wholeheartedly.

She reminded them that the President Julius Maada Bio is the only president who has paid school fees for their children since independence.