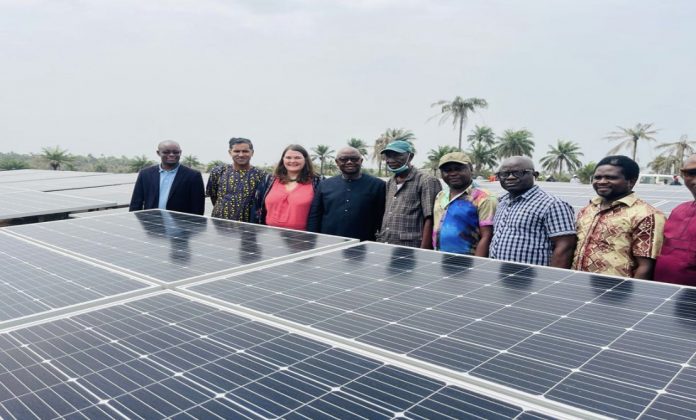 Sierra Leone’s Minister of Energy, Alhaji Kanja Sesay, has at the official commissioning of the mini grid at the strategically important town of Masiaka reiterated the commitment of the New Direction Government to substantially increase national access to energy.

Welcoming the Minister and others, Regent Chief of Koyachiefdom, Saidu Mohamed Conteh, described the occasion as “a dream come true” for the people of Koya, adding that with Masiaka being a strategic town, it was always an imperative that the town was illuminated.

He said the people of Masiaka were more than happy for the novel facility and called on authorities to provide a similar facility for the town of Songo. He said the electricity will set in motion a train of social and economic events that will culminate into the marked improvement in the lives of the people.

While officially switching on the light, Energy Minister, Alhaji Kanja Sesay, conveyed the greetings of President Julius Maada Bio to the people of Koya, noting that he had always been at pains to see a town as importantly located as Masiaka impenetrably or eerily dark at night.

He said it was with a view to correcting that anomaly that he had to galvanise the support of partners, emphasizing that he felt happy and fulfilled to be at a ceremony marking the official turning on of the light to end the town’s painful or tiring wait.

Alhaji Kanja Sesay spoke about government’s strides to colossally increase national access to energy, citing the districts electrification project and the rural mini grid drive as pointers to such strides.

He said Conakry De, Masimera, Melikoure, Petifu, Mange and now Masiaka were among towns in Port Loko district that had been provided with mini grids. He appealed to the people to own the project and to abstain from the act of illegally abstracting electricity.

Development Director at the British High Commission in Sierra Leone, Kobi Bentley said she had responsibility to superintend over all United Kingdom’s aids in Sierra Leone on behalf of the Foreign Commonwealth and Development Office, FCDO.

She said the British Government through the FCDO had provided more than 37 million pounds for mini grids in Sierra Leone, adding that the United Nations Office for Project Services, UNOPS and the Government of Sierra Leone were implementing the project, noting that the project was the first of its kind in scale and scope.

Madam Bentley spoke about the social and economic benefits of electricity and commended the collaboration between and among partners in the mini grid sector.

Engineering Team Lead for UNOPS, Ezekiel Kamangulu, said his company had implemented the project on behalf of the Ministry of Energy, stating that the project aims to catalyse the Government of Sierra Leone’s blueprint to increase energy access through decentralised means.

He said the project was not only going to increase access to renewable energy but would also serve as a trigger for economic and social growth.

Co-founder and Vice President for PowerGen, Joseph Phillip, said his company was excited to be working in Sierra Leone, noting that Masiaka was the 27th community that his company was now taking care of in respect of the running of mini grid facilities.